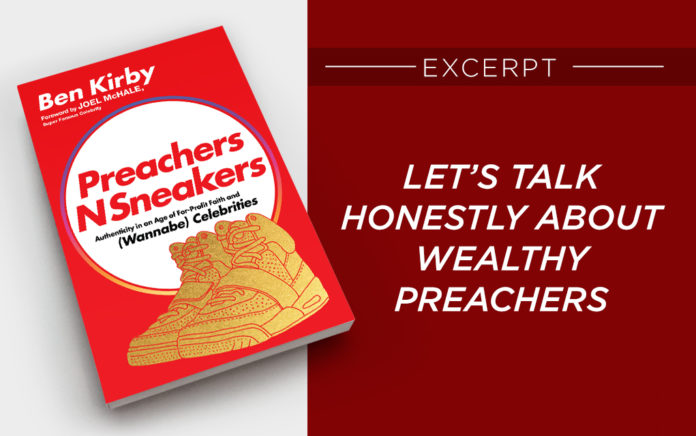 Excerpted From
PreachersNSneakers
By Ben Kirby

A couple of years ago, I started an Instagram account calling out hipster pastors wearing $1,000 sneakers, and the internet blew up. This was never my intention for starting @PreachersNSneakers, and I am still in shock that more than 250,000 people follow the account today. But the intense interest from churched and unchurched people alike—as well as the fierce criticism from the Christian aristocracy—tells me that it’s time to have an honest discussion about wealthy hipster preachers. I’d like to call a family meeting.

Until recently, public criticism about pastors’ lifestyles have been relegated to the superrich guys. You make fun of their private jets and quaint McMansions without too much backlash. There is general consensus about that being ridiculous, but now (I hope) more Christians are willing to ask hard questions about the new market of faith leaders and the benefits of their ministries versus the risks.

Are today’s hype priests and prosperity pastors just furthering the Christian entertainment marketplace, starving the need for actual biblical teaching and in the meantime lining their pockets and building up their platforms and influence? It’s fair question that deserves a honest answer, even if asking it makes us feel uncomfortable.

There has been constant debate in the comment section of my account, as well as in the media, about the efficacy and appropriateness of my approach. I’ve been accused of furthering “callout culture” and tarnishing the Christian witness. But the PreachersNSneakers experiment have allowed Christians and non to express something that they had long felt was problematic within the Christian community (celebs included).

The idea that you could get stupid rich just from being a pastor, preacher or worship leader does not sit well with many, but at first, I didn’t realize why. PreachersNSneakers forced me and others to wrestle with why we felt what we felt. It forced pastors to wrestle with the fact that some of this critique might be valid or worth considering. As one of my podcast listeners told me in an email recently, “It is just refreshing to know I can wrestle with these thoughts, too, and still love Jesus.”

Finding the grace to wrestle with doubts and questions that may have made you feel guilty in the past is helpful.

Accepting that God is not scared of your doubts, questions or concerns is helpful.

Evaluating whether dominant expressions of Christianity are best, or even good, is helpful.

At the center of these discussions is the idea of prosperity. It is easy to write off the traditional prosperity gospel as a manipulative ideology that just benefits the one spouting it. It is easy to dismiss the televangelists who claim that God is concerned whether or not we find a coveted parking spot at the mall while billions of people barely live on two dollars a day. But many, many less flashy churches and pastors are selling a somewhat subtler version of the same message.

On the other hand, having studied this idea of prosperity for the last year or so, I’ve come to the conclusion that God does wish for us to flourish, even while some people still suffer. I don’t understand why that works or how. All I know is that God is not on the hook to make my life better than anyone else’s, but we are all on the hook to pray for and tangibly help those in need.

One of the problems with the prosperity gospel in any form is that it is as materialistic as the culture in which it flourishes. It focuses our attention on stuff—money, jobs, clean bills of health. If we reduce God’s blessings to only include what we can taste, touch, and see, no wonder we often don’t approach God and ask for the substantial things he is actually capable of. I’m more likely to pray for a job promotion than for wars to cease and homelessness to end. Do we actually believe that God wants to give us more than just a pile of trinkets and 3% cost-of-living raise?

We should never be afraid to ask how we can better elevate the name of Jesus. This is an imperfect struggle that we all need to continuously strive for, myself included. I really don’t care about who wears which sneakers or how much they cost, but I do care about how the Christian faith is being represented to the world. For better or worse, the people we choose to idolize in our strange Christian subculture are the de facto representatives of the Christian faith. If we care about the Christian witness in an increasingly secular age, then perhaps it’s time we talk honestly about wealthy hipster pastors.

From Outreach Magazine  Lance Hahn on 'How to Live in Fear'

Excerpted from PreachersNSneakers: Authenticity in an Age of For-Profit Faith and (Wannabe) Celebrities by Ben Kirby. Copyright 2021 by Ben Kirby. Used with permission from Thomas Nelson.