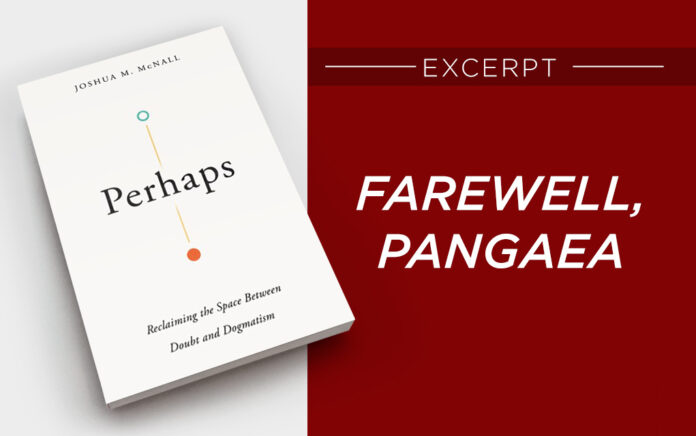 The proof is in the pudding and the praxis.

According to those strange creatures called geologists, all of Earth’s continents were once united as a single landmass: Pangaea. But over time, they drifted. In the oft-quoted words of the poet: “Things fall apart; the centre cannot hold.” In some cases this incremental sliding of tectonic plates brought new unions for the torn-asunder landforms. There were “remarriages,” as when the Indian subcontinent sidled up to what is now called Asia. The two became one. Their bond birthed the mighty Himalayas, now home to the world’s highest peaks, still inching upwards.

But in most cases, the drift put added distance between landforms. And the separation is ongoing. At present, North America and Europe continue to retreat from one another across the Mid-Atlantic Ridge at a rate of approximately one inch per year. Despite the evidence for this division, I have never once felt it. It is possible for the ground to move beneath your feet without you ever noticing. The Mid-Atlantic Ridge is hidden under several thousand feet of water, and the only portion that is not submerged bisects the tiny country of Iceland at the Reykjanes Ridge. I have never been there. Hence, the physical scar of continental fragmentation continues to escape my view.

More visible is the fragmentation in our human tribes. For we too have our fault lines. This book details one such split within the fractured family known as “evangelical.” Specifically, it notes the common move toward one of two extremes:

1. The land of unchecked DOUBT, and

2. The land of strident DOGMATISM.

My claim is that neither of these alluring postures best characterizes a Christian attitude toward the vexing questions of the faith. And my goal is to set forth a third space by which to reclaim the sacred ground between certainty and skepticism. I call this middle ground perhaps. And in this way, the book is about retrieving a form of sacred speculation.

To many theologians, my task will sound quite strange. After all, to refer to one’s theology as “speculative” is rarely (if ever) a compliment. At conferences and in book reviews for academic journals, the label is invariably a kind of putdown. Take, for example, the claim of Scott R. Swain in a recent work on theological method: “We should be ‘anti-speculative’ in our theology,” he writes. For to be otherwise “closely approximates the vice of ‘curiosity.’” Speculative theology is contemplation cast into its “vicious mode.” Swain takes this colorful phrase from the late John Webster, who had himself borrowed it from Augustine. From this vantage point, curiosity is a vain, wicked, prideful, and idolatrous defect that stretches beyond divine revelation in a hankering to know as only God knows. Translation: It’s bad. And many others concur.

Friedrich Schleiermacher (1768–1834), for all his theological revisions, wanted “nothing to do with any concept of God reached by way of speculation” since to do so would allow philosophical reasoning to usurp the feeling of absolute dependence. Schleiermacher vowed that if he were to find a single speculative proposition in his monumental work, The Christian Faith, he would “strike it out.” Karl Barth (1886–1968), while leveling the charge of speculation against Schleiermacher, agreed entirely with its vicious nature. Barth defined speculation as a kind of natural theology that proceeds from some other basis than God’s concrete revelation in Christ. Finally, Kevin Vanhoozer says flatly that “Christian dogmatics is not a speculative discourse that begins from or limits itself by means of an abstract concept of infinity. It is rather a response to a prior divine communicative initiative.”

Virtually everyone agrees that speculation is a very naughty thing, even if we now have several different definitions for what it is:

1. Indulging the idolatrous “vice” of prideful curiosity (Webster and Swain)

2. Replacing the feeling of absolute dependence with philosophical reasoning (Schleiermacher)

4. Starting from an abstract concept of infinity rather than the prior divine Word (Vanhoozer)

Not every one of these ideas is mutually exclusive, and I agree with several of their points. Still, I confess that curiosity and speculation seem to have joined a host of other theological terms that are sometimes hurled more as weapons than as clear and useful descriptors.

So at the risk of taking a “vicious” and unpopular position, allow me to quote the wizard Dumbledore against the Christian theologians: “Curiosity is not a sin. . . . But we should exercise caution with our curiosity.” My book defends a form of speculation in theology and in the Christian life, albeit with some important cautions. All elements of Christian doctrine require a certain stretching forth into the “dazzling darkness” that lies beyond our view—if only to encounter Light. So while this kind of speculation is not always a virtue, neither is it automatically a vice. The proof is in the pudding and the praxis. I argue that a certain form of “faith seeking imagination” is essential, especially in a climate of polarization and partisan infighting. Both evangelicals and their opponents need to relearn the word perhaps.