Home Books Apologetics Can the Gospels Be Trusted? 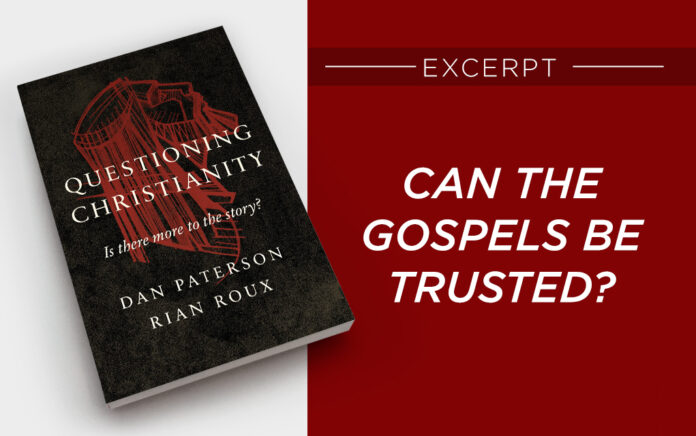 Can the Gospels Be Trusted?

Jesus opens an avenue for establishing the Bible’s trustworthiness through a legitimate appeal to authority. For if Jesus was who He claimed to be (God become human) and if Jesus verified Scripture as being trustworthy as a book from God, then without any serious defeaters to disprove the Bible’s reliability, we have good reason to take Jesus at His word and accepts His view of Scripture. So rather than verify the reliability of the whole Bible, we can narrow the test sample to the Gospels to investigate whether they stand up to scrutiny as the primary historical sources on Jesus.

So can we trust the Gospels?

The first reason why you can trust that the Gospels record reliable eyewitness testimony about Jesus is that the stories are loaded with fleshy details that only eyewitnesses would know. Imagine how extraordinarily difficult it would be, without the help of Wikipedia or Google Maps, to get incidental details right about a people and a place with which you were completely unfamiliar? Yet the Gospels, which likely were not written in Jerusalem but in other cities of the Roman Empire, are packed with accurate intimate knowledge of the architecture, road systems, town names, city elevations, religious customs, political tensions, food, agriculture, botany, and even popular names of the people who lived in Galilee and Judea at the time of Jesus. This feature is precisely what distinguishes the canonical Gospels (Matthew, Mark, Luke, and John) from the controversial gnostic Gospels (Thomas, Peter, Judas, Mary, Phillip). These latter works were rejected from being part of the Bible’s canon not only because they were written over a century after the events they supposedly record, meaning they couldn’t possibly have come from the apostles, but also because, unlike the canonical Gospels, they lacked any of the relevant details you would expect if they contained reliable eyewitness testimony.

A second reason you can trust the Gospels is that the content is simply too counterproductive to serve as religious propaganda. If the goal of the authors was to convince Jews, Greeks, or Romans to sign up to believe in and follow Jesus, then many unbecoming details would have been airbrushed out before the Gospels went to print. For instance, if the Gospels are meant to establish the authority of the apostles, it hurts their credibility to be painted as a bunch of bumbling fools on nearly every page. After all, Peter fails to walk on water (Matt. 14:28-33), denies Jesus three times (Luke 22:54-62), and even provokes Jesus to refer to him as Satan (Matt. 16:23), which is not exactly a resume you want announced by the emcee before you stand up for a speaking gig. If propaganda was the point and you wanted to establish Jesus as God, then centering the biographies around His execution would be a spectacular exercise in self-sabotage, since everyone in the first century would have understood a crucified God to be a complete contradiction in terms. So when one considers how brutally honest the Gospels are about innumerable embarrassing features, the most plausible explanation is that these blemishes bear testimony to their authenticity. They report what actually happened.

A third reason you can trust the Gospels is that the testimony recorded was high stakes. Worshiping a man as God was considered an act of extreme blasphemy for the first-century Jews who comprised Jesus’ inner circle. Not only did Jesus’ divine claims cause His half siblings to reject Him as mad (Mark 3:21), but it sparked the religious establishment to want Him executed (John 10:33). Blasphemy was a big deal. Eternal condemnation was on the line if they were wrong about Jesus, and there seems to be no temporal gain for lying about it either. Jesus’ followers eschewed riches, often faced beatings and imprisonment, and were chased away from their homes and livelihoods for believing in and following Jesus. We have good historical sources to confirm that at least four of the apostles were martyred for preaching about Jesus and no evidence that any of them recanted their testimony. That they were willing to face intense hardships and endure brutal executions makes no sense unless they genuinely believed the veracity of their testimony, especially in light of the eternal cost if they were wrong. So the high-stakes nature of their testimony, along with the admirable character of the apostles, all speak to the Gospels’ authenticity.

Perhaps the most compelling reason to trust the Gospels, though, is the colossal figure of Jesus Himself. Anyone who could invent such a moral genius would have to be a literary luminary beyond the likes of Shakespeare. There is a gravity to His teaching, a singular caliber to His life, and the ring of truth in His redemptive interactions with the men and women of the Gospels. If Jesus did not exist – or was unhinged or some evil imposter and not who He claimed to be – then it is a nearly impossible task to explain the source of the revolutionary teachings and explosion of the Jesus movement.

Now none of these reasons to trust the Gospels placate all the objections to the Bible. Each barrier you have should be carefully considered with good resources and patient investigation. What our reasons do offer, though, is a starting point. Because if Jesus did rise from the dead historically as these sources testify, then we have no reason to deny the supernatural out of hand and every reason to start taking Jesus seriously, including what He said about the rest of Scripture as inspired and trustworthy.

Excerpted from Questioning Christianity: Is There More to the Story? by Dan Paterson & Rian Roux (© 2021). Published by Moody Publishers. Used by permission.