Home Books Apologetics Do We Have Jesus’ Actual Words? 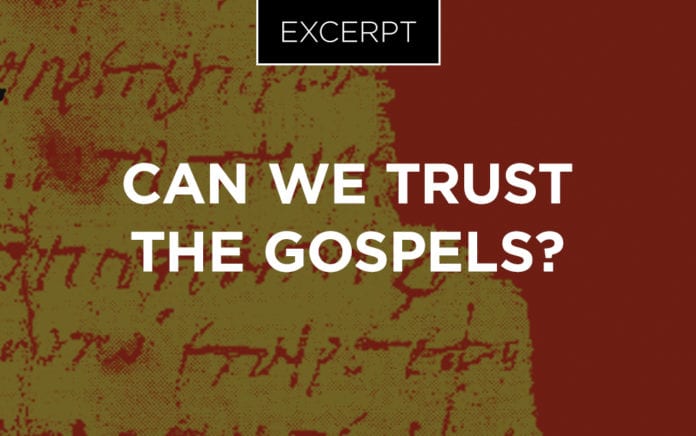 We can be confident that Jesus spoke the words recorded in the Gospels. Here’s why.

Excerpted From
Can We Trust the Gospels?
By Peter J. Williams

Arguably, we have greater knowledge of what Jesus said than of sayings from any other ancient person who did not write a book. Often ancient writers present us with a single source for an ancient speech—Pericles’s “Funeral Oration,” in Thucydides; or Eleazar’s pre-suicide speeches, in Josephus. Occasionally we are fortunate to have more than one source of what someone said. For instance, with Socrates (d. 399 BC) we have two main sources, Plato and Xenophon, and scholars debate how much of what is attributed to Socrates actually goes back to him. But for Jesus, the Gospels give us an unusual combination of speeches and sayings of varying lengths, as well as numerous interactive scenes. Since all four Gospels record speech extensively and in a variety of complex interrelationships, reports of Jesus’s speech can be examined for signs of authenticity.

In the Gospels the bulk of Jesus’s activity is set in Galilee or Jerusalem, with stays recorded in Judaea and some events whose locations are not entirely clear. Jesus is also reported to have visited Samaria (John 4:4), Peraea (Matthew 19:1) and the region near Tyre and Sidon (Mark 7:24). This chapter will argue that we have multiple reasons to trust the reports of what Jesus said in the Gospels, but before we consider those, we must first define what trustworthy reporting is.

Nowadays we use quotation marks to distinguish quoted words from their surroundings. Though having special signs to indicate speech is at least as old as the Hittites of the second millennium B.C., our modern quotation marks are quite recent, originating only in the sixteenth century. However, they change the way we think about quotation. They mark the beginning and the end of speech and, by doing so, introduce two rules into truthful reporting that simply did not exist before quotation marks were invented: They demand (1) that no words be omitted without indication (such as by ellipsis points) and (2) that no words can be added, modified or substituted without indication (such as by square brackets). We must remember that when the Gospels were written, these two rules just did not exist. That means that we need to think ourselves back into a time when these two rules were not even considerations.

From Outreach Magazine  5 Things to Remember About Worship

I regard this as the problem of bounded quotations. It is not that people in the ancient world did not have an idea of accurate quotation and were unable to quote verbatim. There is plenty of evidence of exact quotation, no different from our quotations today. But we do not have to think about it for long to recognize that our modern conventions are rather constricting on truthful reporting, because in our culture we feel the need either to quote a whole sequence verbatim (in which case it must be within quotation marks) or else to paraphrase it, often trying not to use the exact words in order to avoid a charge of plagiarism. In practical terms, this also means that we have a rigid distinction between reporting direct speech (“she said, ‘X’”) and indirect speech (“she said that X”). Our weddedness to marking bounded quotations is mainly a product of our inability to think outside our writing conventions and must be set aside when we want to evaluate the truthfulness of an ancient report of speech.

Ancient truthful and responsible quotation did not need to observe our modern rule of marked boundaries. It was typically announced with a verb or particle introducing the speech and, unless explicitly claiming to be complete and verbatim, should be read in the knowledge that, in an ancient culture, truthful quotation granted certain freedoms in quotation not available to us.

This does not mean that truthful quotation could include just anything. Within Judaism we see plenty of interest in the memorization of what rabbis said. In fact, the period of approximately the first two centuries is commonly known within Judaism as the tannaitic period, named after the tannaim, plural of tanna, meaning one who memorized and taught the tradition of the oral law. Rabbinic confidence in memorization was so high that some rabbis even banned the writing of oral traditions. Though we cannot be sure that all Jewish traditions which were later written down preserve information from before A.D. 70, scholars agree that the Mishnah (early third century), Jerusalem Talmud (early fifth century), Babylonian Talmud (early sixth century), and Masoretic vocalization tradition (sixth to tenth centuries) preserve information from the first century.

The likelihood that Jesus’ teaching was preserved is highlighted when we consider that all four Gospels present him as a formal teacher, with students (disciples). By my count there are 195 references in the Gospels to individuals or groups as his disciple(s). Forty-five times he is said to teach, 40 times to be a teacher, and 12 times he is called rabbi. Luke alone, who more commonly avoids exclusively Jewish vocabulary, does not use the term rabbi. If Jesus really was a teacher or rabbi and had 12 special disciples, and if these terms are to have their normal meanings, then we would expect that a significant task of the disciples would have been to memorize specific sayings of their teacher.

The content of many of the sayings seems more likely to have been passed down rather than invented. Jesus often made statements that would have been tough for early Christians to stomach. In Matthew’s Gospel he calls his followers “evil” (7:11), refers to Gentiles as “dogs” (15:26), tells his followers to do everything their frequent opponents the Pharisees say (23:3) and dies asking why God has forsaken him (27:46). Other Gospels are similarly embarrassing. Moreover, he does not say precisely what people might want him to say by giving guidance to those who will come later. He leaves no explicit instructions concerning what to do about non-Jews in the church, what to do about circumcision or how to run a church meeting. These omissions are what we would expect if the sayings really do come from a Jewish rabbi.

Excerpted from Can We Trust the Gospels? by Peter Williams, ©2018. Used by permission of Crossway, a publishing ministry of Good News Publishers, Wheaton, Il 60187, Crossway.org.