Excerpt (Part 1): The Beautifully Sent Church (Chapter 1) from AND by Hugh Halter and Matt Smay

Before I share this next thought, /I feel compelled, out of my personal insecurity, to tell you that I’m a man . . . a real man, a man’s man. I like mixed martial arts. I often eat an entire Chipotle burrito with extra meat. I enjoy fishing, hunting, and taking the top off my Jeep Wrangler during 2:00 p.m. lightning storms in Denver. I don’t eat glass, but I do enjoy the challenge of seeing how many pieces of bacon I can consume without negative internal issues. I’d like to keep going so you really know that I’m securely entrenched in my manhood, but I should probably move on.

The reason I waste your time proving myself to you is because yesterday, while in the lobby of a hotel, I was watching a morning news show where the newscasters were sharing the story of Chris­tian the Lion. There’s a book about this lion available, so I’ll spare you the details, but essentially these two dudes who lived in London decided to purchase and try raising a lion together. Even though they didn’t know much about lions, they apparently did a great job. Eventually, when their pet lion reached adult size, they felt compelled to release it into the African wild. They weren’t sure if he would survive, and it was incredibly painful for them to say goodbye to Chris­tian.

A year later, they decided to return to Africa and see how the lion they had raised was doing and whether he would still recognize them. They had a video camera on the scene when Chris­tian came out of the woods, and the news show let us watch their reunion. It was pretty amazing! Chris­tian the Lion came slowly out of the savanna, caught wind of his old friends, and then saw them off in the distance. Excitedly, he rushed toward them and mauled them with love and licks and lion hugs and all sorts of other feline mushy stuff. As I watched, I had to look around to make sure no one was watching me, because I was whimpering like a teenage cheerleader who just got dumped by her first boyfriend.

So why all the emotion? Whenever I see someone invest time and energy and love into something and then willingly sacrifice it, giving away what they have, it’s powerful!

I’ve seen a similar story played out many times when I’ve been fortunate enough to officiate weddings. Just last year in Adullam, I performed thirteen wedding ceremonies. Most of them were in beautiful settings. Some were in the Rocky Mountains, often overlooking spacious woods, canyons, or rivers. Some were in the city in ornate churches, and two were actually on beaches —  one in Florida and one in Cancún.

Most of the ­couples I knew very well. As I had a hand in even helping some of them connect, I always felt compelled to get to know the parents during the preliminaries. On the rehearsal day, the moms were usually busy, scurrying around working, while the dads tended to lie back, grab a beer, and wait for their one and only responsibility. Although the job of the bride’s father is pretty easy, I’ve learned that I need to have them practice it at least once. Their primary task? To give away their daughter, the bride.

Most of the fathers I’ve had the privilege of knowing were pretty burly dudes, hearty blokes with calloused hands, a hard work ethic, and broken-down bodies as evidence. Yet without exception I find that during the trial run these guys seem to get really quiet, sometimes even welling up with a few tears. It’s only practice, but they seem to suddenly get serious when the thought hits them and they realize they are about to say goodbye to their little lady.

The next day, the real deal happens. After the procession, a few songs are sung, maybe a reading or two, then the music changes to signal the entrance of the bride. As the reverend, I always try to remain composed . . . after all, that is my job. But something diabolical happens to me at this point. I always make the mistake of looking at the face of the bride’s father. Most of the time you can see the dad starting to quiver, his eyes filling with moisture as he reflects on how important this girl has been to him. Most men don’t think in detailed pictures, but no dad can forget the thousands of memories: the times we protected them, worked hard to provide for them, taught them to drive, took them to practice, rooted for them in the bleachers, or drove them to their first day of college. It’s just too darn much to take in! Every time I see the face of that father, I just lose it and have to fight to keep from bawling like a baby.

The father slowly walks his cherished daughter down the aisle. The music stops. Dad stands proudly, painfully holding back his emotions, as I say, “Who gives this woman to be joined in marriage with this man?” After a pause, the father responds, “I do.” He then takes his daughter’s arm and gently unwraps it from his, bends down to kiss his baby goodbye, and extends her hand out toward this new man and her new life with him.

I realize that some ­people today think that marriage is old-fashioned and unrealistic. And there are ­people today who feel the same way about the church. They think the church is outdated, boring, worthless, archaic, self-serving, and out of touch, a waste of time and a poor use of money. But the Scriptures speak clearly for God when they call the church his bride, and it is in this title and in the essence of being given away that we will find the meaning and reason to keep going.

I share this reminder of the church because I know how easy it is to forget this amid the mundane duties often required to lead a church. So many —  dare I say the majority? —  of existing pastors and church planters we’ve run with often speak respectfully, but discouragingly, about what life has become for them serving in vocational ministry. Things like sermon preparation, staff issues, ­people in constant crisis, friends letting you down, constant critique from other ­people (and yourself), ­people expecting more time than you can give, your spouse and children not getting enough of your time or the right type of time, arguments over silly stuff like how we sing to God, what we should do with church money, how do we get more church money without making it seem like we want their money, how we relate to our denomination when they seem to be out of touch and unwilling to measure or manage the right things, not to mention clarifying vision, values, mission, and blah blah blah . . .

I suppose you could add a few hundred of your own personal zingers. Add to these struggles the myriad internal pressures of trying to be an authentic person, a faithful leader amid peer pressure, trying to perform and succeed (or at least to save face) while fighting to live as a true missionary, and spending time with those outside the church walls when it seems as though the only way to hold “the thing” together is to spend more time in the church building.

Without a reminder of the bigger picture of God’s church, we can often settle for a view of church leadership that is more like cleaning the garage or babysitting than the adventurous voyage we believe it should be. What should be the best thing in the world isn’t at all compelling or curious to the unchurched. Most of the time it’s not even all that meaningful for a good majority of those in the church. We know the idea of church still makes a lot of sense, and at times we garner more buy-in from the congregation and compel folks to get more involved or to be more committed. Yet at the end of each week, we feel as if we’re still trying to lasso mice or sell sand to ­people who live on the beach.

And yet, miracle of all miracles, more and more leaders keep signing up and trying to make it happen. It’s sort of like watching ten well-trained bull riders get kicked off, stepped on, ground into the dirt, and gored. Yet for some strange reason the next guy happily ropes in and rides the same bull. There’s just something about this thing called church that captures our hearts and keeps us fighting for a better day.

Maybe it’s that exhilarating feeling you get when one —  yes, even one —  person moves an inch forward spiritually. Or hearing a ­couple say they’ve found a home in your church, or knowing that ­people took care of someone in need or bailed someone out. Twice a year we baptize ­people in a lake by my house, and I have never driven home from those times dry-eyed. There is nothing quite like the thrill of witnessing a whole community of ­people, standing ankle deep in the water, express their allegiance with scared but smiling “dunkees.” It’s about the best feeling in the world. Although the good moments don’t seem to come as often as the difficult moments, I think I’m beginning to understand why I’m doing this church thing after all.

It’s sort of like that part of the lion story where the two guys send their beloved Chris­tian away, or where the father gives his daughter away to experience the joy of a new life with her husband. It’s the sentness of the church —  giving ourselves away so that others can know God —  that keeps us all in the game, playing our hearts out. The mysterious awe associated with the Bride of Christ is in the character of her sacrificial and missional calling. The church is beautiful because it is endowed with the purpose of giving herself away wholeheartedly to the world God desires to redeem. To move past all the paralyzing church deconstruction, it may be helpful to rehear the story of the bride.

Each issue of Outreach is designed to bring you the ideas, innovations and resources that will help you reach your community and change the world. 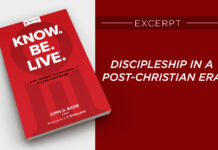 Discipleship in a Post-Christian Era