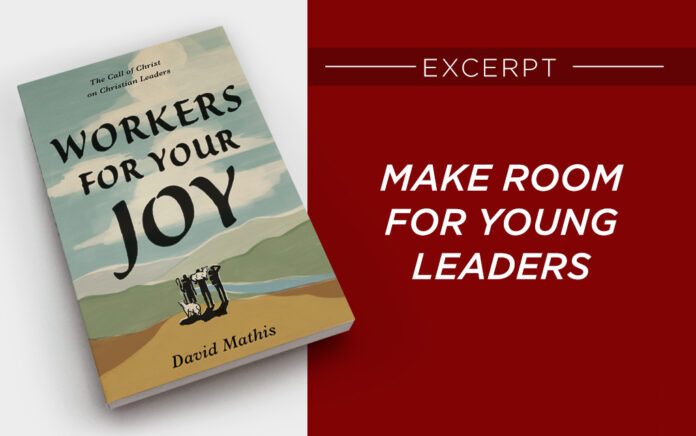 Consider a plea for some older leaders not to get off the bus but to aggressively make room for young leaders at the front.

What some aging Christians need from the younger generation is an invitation to lean into the local church, and not retreat or retire. But others from the older generation may need a different challenge—a summons to lay aside suspicion of those young enough to be their offspring, a charge to dispose of a derogatory view of the real-live specimen of the next generation. Consider a plea for some older leaders not to get off the bus but to aggressively make room for young leaders at the front.

Do Not Despise the Young.

It was a two-part charge the aging apostle gave to his younger-generation protégé in 1 Timothy 4:12: “Let no one despise you for your youth, but set the believers an example in speech, in conduct, in love, in faith, in purity.” One part goes to the younger generation: by exhibiting model Christian posture in word and deed, give the older generation no good cause for despising your youth.

But the second part is for the aging generation that overhears the directive, like the Ephesian church reading Paul’s letter over Timothy’s shoulder: by exuding a model Christian disposition toward brothers and sisters in Christ, give the younger generation the benefit of the doubt. Don’t expect the worst of fellow believers, regardless of their age. Let the gospel go to work on your subtle age prejudice.

In this generation, Larry Osborne has been one pastor and author helping the massive leadership transition between boomers and their millennial progeny. Whether in business, government, or the church, many have felt the tensions, as what was America’s largest generation has been giving way to its more numerous offspring.

Osborne makes the observation that on the high school and college campus, it seems “the freshmen always get smaller.” As we age, each year’s crop of incoming students seems less impressive than the class before. If that’s true of just four years on the campus, what about the long arc of adult life? In the church, says Osborne:

“The seniors never graduate (at least not until they’ve become literal seniors and start dying off). They hog the leadership table, shutting out the next generation. It’s one of the main reasons that most churches stop growing and lose their evangelistic touch (and cultural relevance) around the twenty-year mark.”

The Christian vision for leadership is not a tenure model in which whoever’s been around longest occupies the seats of privilege and prominence as long as they want. Rather, the force goes the other way: laboring proactively and assertively to raise up younger leaders to fill our shoes and do our job better than we did. This gets at the Great Commission essence of making disciples (Matt. 28:19) and applies it to church leadership. But such a vision of leadership is costly. There’s a price to pay, says Osborne:

“Leadership is a zero-sum game. One person’s emerging influence is always another person’s waning influence. That’s why making room for the young eagles is a hard sell, especially to those who already have a seat at the table.”

Such a deferential and self-humbling dream for raising up new leaders may seem far-fetched in government and business, but shouldn’t it have its best chance in the church, where we follow one who came not to be served but to serve (Mark 10:45)? Do we not believe that true greatness is in service, not in lording it over and exercising authority (Mark 10:42)? We aim “in humility [to] count others more significant” and “look not only to [our] own interests, but also to the interests of others” (Phil. 2:3–4).

But are we not, then, compromising wisdom in church leadership by replacing some qualified members of the older generation with those from the younger?

On Sunday morning, August 29, 1982—with the first of the millennials still in diapers—a thirty-six-year-old baby boomer took up Job 32:7–11 and preached on the young man Elihu. The sermon was titled “Let the Young Speak.” That night, the church would be ordaining twenty-seven-year-old Tom Steller, and John Piper wanted to prepare his congregation of gray heads for laying hands on such a youth. The key verses were Job 32:8–9: “It is the spirit in man, the breath of the Almighty, that makes him understand. It is not the old who are wise, nor the aged who understand what is right.” Said Piper:

Of course, there is, then, no necessary connection between youth and wisdom, either. What Elihu has done is remove age as the dominant consideration in deciding who is wise and understanding. He teaches us that there may be folly in the old and folly in the young; wisdom in the young and wisdom in the old. When we search for a source of wisdom, we do not end our search with the question, “How old is he?” We end it with the question, “Who has the Spirit of wisdom and understanding?”

Excerpted from Workers for Your Joy by David Mathis, ©2022. Used by permission of Crossway, a publishing ministry of Good News Publishers.