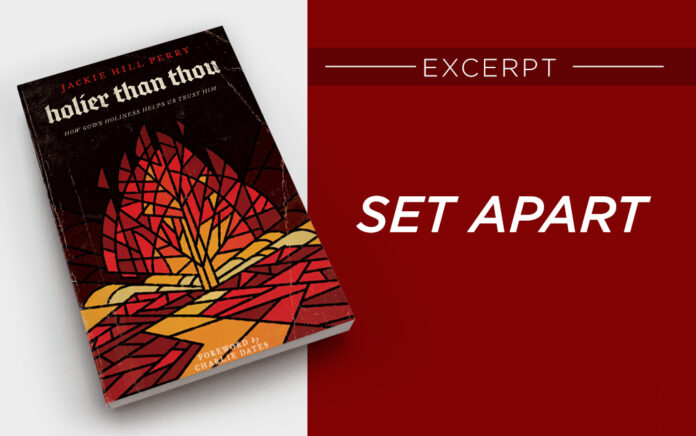 Compare God to Everything. What Do You See?

There’s a sermon by the great Tony Evans in which he uses an illustration involving dishes to make sense of the term “holy.” In his home, and in most homes really, there are two types of dishes. There are the regular dishes. The ones you corner off with French fries and squirt with ketchup. Those dishes that contain the average meal, on normal days, for your ordinary and unimpressive breakfast, lunch, and dinner. Some of them are chipped, maybe even cracked, and if they are, you don’t whine over their disposal because they were never made to be special anyway.

Then there is another type of dish. These dishes don’t even see the light of day until a tall green tree with multicolored lights flicker them onto the dining table. Something significant has to be happening under the roof to make their use a necessity. And when all is normal again, the candles have been blown, the wrapping paper has been scattered and collected, the guests have finally gotten up from the table, these dishes, after being cleaned, aren’t placed in the cabinets with the French fry and ketchup plates. Those are too typical and regular for their company. They’re placed in an entirely different cabinet, that may be in an entirely different room, separated from everything unlike them because there is nothing in the house like them. They are set apart, unique, different, other, distinct, cut off from what’s considered common. To put it metaphorically, these dishes are “holy.”

So to say of God that He is holy is to identify His position as a being that is set apart. From what or who is God separated from though? Holy people and things are holy only if they are separated unto God but who is God set apart from? The answer is simple. God is unique, different, other, and distinct from everything that exists.

Moving backwards to the beginning of the sixth chapter of Isaiah, what the Seraphim say about God is observed by Isaiah. He says, “In the year that King Uzziah died I saw the Lord sitting upon a throne, high and lifted up; and the train of his robe filled the temple” (v. 1). First of all, it is when Uzziah dies, as in, gives up the ghost, that Isaiah sees God. Which is to say that though Uzziah is dead, God is alive. This may seem like an obvious truth that doesn’t have much to do with holiness, but you are missing the point if you thought that for yourself. God isn’t holy simply because He’s alive. If that were the case, anybody with breath could be classified as holy. God is holy because God has always been alive and after every king, person, plant, star, or moon passes away, He will still be. Even though all life begins with God, with God, there is no beginning. Another way to say it is that God is self-existent. He exists because He exists. He needs no one but Himself to be, therefore He always has and will always be.

Now, compare God to everything and tell me what you see. What I hope you noticed is that everything that exists has a beginning, is a derivative, is contingent upon something else for its life. Paul describes our lot as creatures, pointing to how it’s only in God that we “live and move and have our being” (Acts 17:28). Can the same be said about God? Of course not. This is what is referred to as God’s transcendence. It means that God is totally unique from everything there is. God doesn’t exist and cannot exist in the same way as we do or anything for that matter, setting Him apart from all creation as a being that is distinct from it; holy. So, in this, we see that God’s holiness is about moral purity, yes, and it’s also about transcendent, self-existing otherness. It’s about being totally right and eternally existent. Which, of course, only God is.

Isaiah sees the living God and calls Him “King, the Lord of Armies”. If the term “lord” was said of another, it wouldn’t necessarily mean the person was holy. Such as Abraham who was called ‘lord’ by Sarah, signifying the authority he holds as her husband. Or owners of land, who in one case was called “the man, the lord of the land” who “spoke roughly to us and took us to be spies of the land” (Gen. 42:30). “Lord” in these cases conveys a sense of “ownership” or “rights” one has over something. What makes the Lord as Isaiah sees Him different from that of Abraham is that as Sarah’s husband, there’s a covenantal ownership at play, where she is his and he is hers (1 Cor. 7:4), but Abraham could never claim sovereign authority over his wife or any other human being for that matter. He cannot treat her as if she existed because of him or that her life and being was ultimately dependent on him. The Lord being praised as holy is so because the titles “King” and Lord “of armies” implies that He isn’t merely an owner of something, He is the owner of everything—he is King of all the earth and ruler of the forces of heaven, too. Not with a few rights for which he has claim but with irrevocable rights over all that was made because all that was made was by His hand, for His glory.

He is Lord because He is King and Creator. From Him came all things, the heavens and the earth of course. The world is His, with it are the hills, on it are the cattle that know Him as maker:, “For every beast of the forest is mine, the cattle on a thousand hills. I know all the birds of the hills, and all that moves in the field is mine” (Psalm 50:10). God is Lord over the heavens, the earth that holds us, and Lord of the body to which we try our hardest to keep to ourselves. “The body is not meant for sexual immorality, but for the Lord…” (1 Cor. 6:13). With the Lord, there is a sovereign rule befitting Him as Master of all and servant of none.

Uzziah’s authority over the small piece of the world that God allowed him to govern was limited in scope and time. Judah, with its millions of folks, was but dust compared to the universe to which God is Lord. His reign, Uzziah’s that is, was all of 52 years. That’s no petty amount of turned clocks but it doesn’t compare to the eternity for which God will always reign. He is the King of kings and so much more, “For the LORD your God is God of gods and Lord of lords, the great, the mighty, and the awesome God…” No being exists as sovereign over all but God; holy.

The Holy God is alive and well, as King of all who sits in a special way. The state of God’s throne is one that is seen as “high and lifted up” (Is. 1:1). You might think the mention of this is about altitude and it might be in one way, but it’s not simply that of geographical position but of preeminence. Height equivocates to the status of supreme. It speaks to the excellence of His being. God is high and lifted up because God is superior over all. He is infinitely valuable because He alone is God. He is “the One who is high and lifted up, who inhabits eternity, whose name is Holy…” (Is. 57:5). We fancy the Earth to be something special and it is because God made it that way but even with all of its derived glory and perceived value, to God it is like a piece of furniture for which he places His feet. He said it Himself, “the earth is my footstool..” (Is. 66:1).

In other words, God rules with power He doesn’t have to borrow. Upholding the world’s orbit and the sun’s heat with a strength Samson knew not of. He is majestic, a King with no equal. Every throne below him is minuscule and without comparison. His ways are high and higher than ours because He is. He is the Most High, as in, He is exalted over everything that is because everything that is, might be good, but they will never be God. Everything wonderful that you have ever known, love, food, sex, laughter, friends, parents, children, sleep, work, money, name it, and it can’t compete with the beauty of God. The Most High calls Himself the Holy One and asks: “To whom then will you compare me, that I should be like him?” (Is. 40:25). No one, Lord; holy.

Excerpted with permission from Holier Than Thou by Jackie Hill Perry. Copyright 2021, B&H Publishing.

Share on FacebookShare on Twitter
From Outreach Magazine  Brad Hambrick: Becoming a Church That Cares Well for the Abused