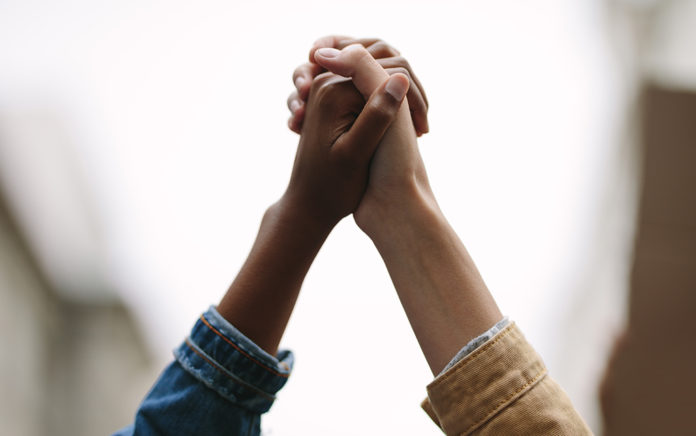 Charity is not enough when we remain blind to the very system that creates the need for charity.

Imagine you are a kindhearted slave owner back in the days when white people could buy Black people in a slave market. You’re a good guy, or a kind woman. And you want to do right by your slaves.

You feel sad about their poor living conditions. So, being an ethical person, a good Christian, you begin to offer some relief:

• You pay for new roofing materials to fix up the leaking roof of their shelter. (Nice.)
• You arrange for them to see a doctor free of charge when they fall sick. (Kind!)
• And you even make sure their children have adequate clothing, shoes and access to books. (So generous.)
• When one of your slaves turns out to have a surprising musical gift, you buy him a violin. (Seriously—someone should make a movie about this.)

Congratulations. You’re a kindhearted slave owner. But you are still a slave-owner: a participant in an unjust and abhorrent system that dehumanizes other people. And this is the age-old practice of charity without justice or kindness without reform. This, right here, illustrates the central flaw of white saviorism.

The film 12 Years a Slave, recounts the true story of Solomon Northup who was kidnapped and sold into slavery. William Ford (played by Benedict Cumberbatch) was the man who purchased Northup for a thousand bucks at a New Orleans slave market. One thousand dollars for a human being.

“There never was a more kind, noble, candid Christian man than William Ford,” says Solomon Northup, in his memoir on being enslaved. Ford’s own great-grandchildren venerate him as one of the most principled and generous of slave owners during a brutal period of time. Imagine that.

The problem is, for all his kindness and generosity to his slaves, Ford never acknowledged the racist system that allowed him to purchase another human being. He never even questioned his own participation in that dirty rotten system of white supremacy.

He was blind. He was a good Christian, a kind man in some senses of the word. But he was blind.

Charity is a good place to start. It’s where most of us begin our engagement. But charity is not enough when we remain blind to the very system that creates the need for charity.

For a better approach let’s turn to Hebrew history.

Ever notice how Moses didn’t spend too much time asking Pharaoh for more food and medicine for the enslaved Hebrews? Moses knew those things—as good as they might be—wouldn’t address the real underlying issue, which was the problem of slavery. Instead he insisted, with God’s prompting, on their complete freedom, declaring, “LET MY PEOPLE GO!”

Then Moses led his own people out of their enslavement and into the Promised Land.

White saviorism fails because it fails to question an unjust system. Settling instead for treating the symptoms of injustice. Slap a Band-Aid on the cancer of injustice. Offer just enough treatment to cover up the festering wound, and allow the stricken to hobble along for another day.

White saviorism is the sin of remaining blind when Jesus is offering sight.

This challenge is not just for white people, despite the title of this article. Let’s not get comfortable pointing the finger elsewhere. This challenge is for every one of us who goes into the world seeking to change it while remaining blind to the power we carry with us—whether through a passport or privilege, money or mastery. The fact that we have the ability to access the internet and read an article written in English means we have forms of privilege and power that most of the world don’t have.

Here’s a twist on a well-known parable to help unpack the issue:

A group of Christians live at the edge of a river. One day, they hear a shout from the direction of the water. As they leap to their feet they see an arm waving from the swirling rapids. They link hands and form a line to wade out and grab the drowning person, pulling them to safety.

The next day, as they are enjoying a picnic and recounting their recent adventures, they hear another shout and see another arm waving frantically. No sooner have they saved that person, than another victim comes floating down the river. And another. Before they know it, they have a full-time relief operation going. They are helping people. They feel good. They have a sense of purpose.

Finally, someone suggests traveling further up the river to figure out who is throwing all these people into the water.

Brilliant idea! And usually, this is right where the story stops.

From Outreach Magazine  How We Did It: Church Plant Vision—Part 1

This story is usually told as a lesson in looking for root causes—identifying systemic injustice, rather than settling for relief and charity. But let’s allow the story to play out a little longer this time.

After a lengthy hike, the group finally reaches the source of the river. They are excited to finally identify the root cause of what is going on. And as they turn the corner, and blink their eyes to adjust to the bright sunlight, they come face to face … with themselves.

Oftentimes, we are blind to the ways we are complicit in unjust systems. Our silence and frankly, ignorance, allow us to keep propping up the status quo—rather than dismantling it.

White saviors help people. Yes. So why is that a problem? Because our Band-Aid charity is not enough to bring real change. Kindness and generosity are a good place to start. I am not saying we must seek justice instead of charity. I am saying we must not be satisfied with mere charity.

We need to do the hard work to understand and address the true root causes of injustice, even when that shines an uncomfortable spotlight on us.

Don’t let this article discourage you from doing good. We may not need any more white saviors in the world. But equally, we don’t need more apathetic, disengaged Christians, who wash their hands of the challenges and complain it’s all just too hard and complicated.

Instead let Jesus gently encourage you to open your eyes. Let Jesus invite you to a humble and subversively different way of living. Because he urgently wants to transform everything, not just tweak things around the edges. And he wants to use you. He wants to use everyone.

But we can never be satisfied with being white saviors again.

We can never again settle for being kindhearted slave owners.

For we have tasted his upside-down kingdom.