Home Features The Hopeful Implications of the Tower of Babel 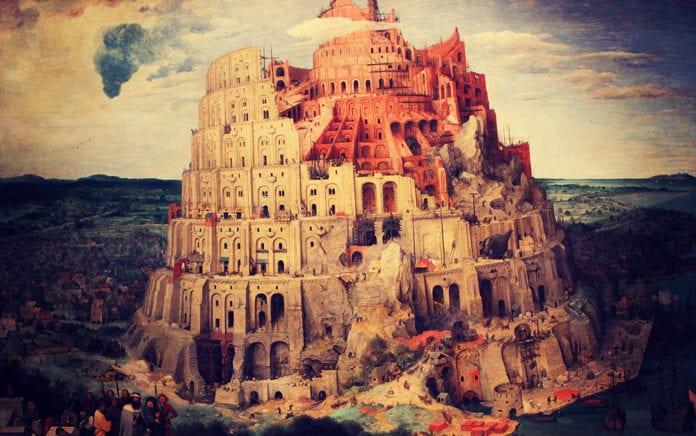 One day, all the nations and every language will be united around the throne of God.

The Old Testament story of the Tower of Babel is one that many of us often overlook in terms of its implications on the life of the church. Honestly, for those of us reading the Bible in our modern context today, the storyline itself can sound quite confusing.

A group of men and women conspire together in the same language to form a great civilization. As the writer of Genesis conveys in chapter 11, the people said, “Come, let us build ourselves a city, with a tower that reaches to the heavens, so that we may make a name for ourselves; otherwise we will be scattered over the face of the whole earth” (Gen. 11:4).

In these moments, self-glory and hedonism manifest themselves quite overtly. This ancient cohort wanted to assert their own will and make their name great; it wasn’t about honoring God or seeking his guidance, but about finding a way to hold and keep power for themselves. So, in Genesis 11:9, God scattered the people and they stopped building this city they had so carefully schemed to construct.

While it might be easy to assume that this story has no bearing on the people of God living thousands of years later after the coming of Christ, that would miss a key part of the point. In fact, we see an important linguistic thread throughout the Old Testament and into the New Testament.

What flows out of the Tower of Babel is quite significant: Nations are created and then, eventually, Israel becomes a missionary to the nations. The prophet Isaiah proclaims this in Isaiah 2:2: “In the last days the mountain of the Lord’s temple will be established as the highest of the mountains; it will be exalted above the hills, and all nations will stream to it.”

The idea in the Old Testament was that the people of God (the Israelites) were to bring the nations up to Jerusalem so that they might rightfully worship the King of Kings and the Lord of Lords.

From Outreach Magazine  Do You Need to Pay the Federal Parking Lot Tax?

Their mission initially was to be a bright light to the world, pointing them to Jerusalem. But we know now that this mission was not engaged rightly and fully as God originally intended.

THE NEW TESTAMENT: PREPARING FOR THE NATIONS TO GATHER

As we read the New Testament, we see that things have changed for the people of God. And, we can see the end result of that change. The picture that’s painted for us in Revelation 7 is one of the nations gathered around the great throne:

“After this I looked, and there before me was a great multitude that no one could count, from every nation, tribe, people and language, standing before the throne and before the Lamb. They were wearing white robes and were holding palm branches in their hands. And they cried out in a loud voice: ‘Salvation belongs to our God,who sits on the throne, and to the Lamb.’ Therefore, ‘they are before the throne of God and serve him day and night in his temple; and he who sits on the throne will shelter them with his presence. “Never again will they hunger; never again will they thirst. The sun will not beat down on them,” nor any scorching heat. For the Lamb at the center of the throne will be their shepherd; “he will lead them to springs of living water.” “And God will wipe away every tear from their eyes.”’” —Revelation 7:9–17

Something seems to have happened between the Tower of Babel and the time when John writes the book of Revelation. And I would argue, it’s recorded in the book of Acts near the time of Pentecost in chapters 1 and 2.

In Acts 1:8, Jesus tells his disciples, “You will receive power when the Holy Spirit comes on you; and you will be my witnesses in Jerusalem, and in all Judea and Samaria.”

Before, the mission was for the nations to be led up to Jerusalem. Now, the mission is for them to be go out from Jerusalem. Later in Acts 2, when the Holy Spirit descends at Pentecost, God supernaturally shows us what it will one day look like for people of all tribes and tongues to gather in worship. We see this in the gift of speaking in tongues that the Spirit gives to those who gathered to receive it.

Regardless of your thoughts on speaking in tongues, all Christians should agree that we need more linguistic tongues in our churches. That is, we need to lean into this vision we see in Revelation and Acts of the tongues of men and women from every tribe and nation communing with the Lord. This is the church’s future—one of harmony with Christ and one another in the new heaven and the new earth.

So, the church needs a lot more speaking in tongues—the tongues of every people group in the world. That was God’s design all along; Babel is just a step toward the throne in Revelation. But, that means we have to prioritize missions to people of all different languages so that they all can indeed be around that throne.

I don’t know about you, but I can’t wait for that day. Amid our anticipation, we must allow this story to compel us to go out and tell all.