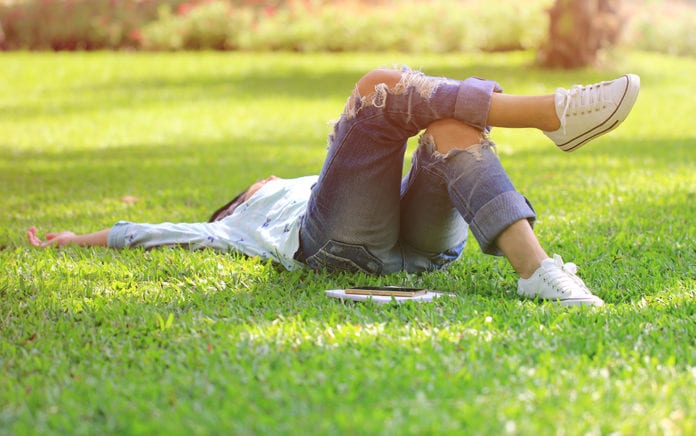 The goal of mindfulness is not to make us more productive, but to direct our eyes to our Creator.

Stressed at the thought of my anxiety-inducing to-do list, I decided to test the popular meditation and mindfulness app Calm, which has been downloaded 12 million times to help people de-stress. I click on the “chasing wonder” thumbnail and am soon immersed in the sights and sounds of a gushing lake, surrounded by trimmed fir trees and dwarfed by snow-capped mountains.

Meditation-via-app has become fashionable recently, popularized by the likes of Lionel Messi, Novak Djokovic and Katy Perry, who practice it to boost their performance. Historically, however, meditation had different purposes. The practice was tethered toward encountering the transcendent.

How has the use of meditation changed in our secular age? And why, despite its ease and popularity, does it leave us impoverished?

The proliferation of meditation apps like Calm and Headspace has become a $14 billion business because it addresses a bigger societal problem: Work is stressing us out more than ever. The increasing pressure and burnout we face at work stems from a new religion that Atlantic journalist Derek Thompson calls “workism”—the doctrine that work is “not only necessary to economic production but also the centerpiece of one’s identity and life’s purpose; and the belief that any policy to promote human welfare must always encourage more work.”

When work becomes the centerpiece of existence, it will inevitably beckon us to strive harder and will set us up for exhaustion. This is the trap I fell into in my late-20s. Hustle-Eat-Sleep-Repeat became the pernicious beat I marched to as I chased the secular standard of perfection in London. Days felt like a race to the finish line, such that even lunch breaks were tinged with guilt.

Times are changing. Today it’s common to find a crowd of hipster employees sitting in zen-like poses, meditating on the boardroom floor during lunch breaks. This is no longer considered weird. “Especially in Silicon Valley, it’s surprising if somebody doesn’t meditate,” explained Calm CEO Alex Tew, whose app boasted 30,000 new users per day in 2018. Employers are also aware of the workism problem and recognize that employees need space to de-stress and meditate. Many testify to the benefits, including Perry: “I meditate before I write a song, before I perform. I feel my brain open up and I feel my most sharp.”

It’s noteworthy that the most popular meditation app, Calm, draws heavily from nature, immersing users in an ecosystem of natural beauty. For a moment, the grandeur of mountains and the sounds of crashing waves lift our heads above the doldrums of our day and remind us there’s more to life than what our strict enclosures offer. There’s something about the vastness of creation that shrinks the self, kindles spiritual questions and puts our day-to-day problems in perspective.

But such experiences are flattened when meditation is reduced to a life hack—an efficiency tool to help transform every minute of our day into economic value. It’s entrepreneurs like Elon Musk (who once worked 120 hours a week) who admonish us to sacrifice at the altar of work, since “nobody ever changed the world on a 40-hour week.” This belief fosters a culture in which burnout is celebrated and work is worshiped. But inside we all know this suppresses what’s important, reducing wonder and beauty to mere cogs for utilitarian ends.

Historically, the practice of meditation and wondering at the beauty of the world moved people to upward belief, a curiosity about higher things and a sense of transcendence beyond the self. But in the age of meditation apps and “mindfulness” techniques, contemplation—like much else in our flattened, buffered, secular frame—is reframed in terms of immanence and personal life-enhancement. Rather than pulling us out of the orbit of self into higher ends, things like nature are pulled into our orbit to be harnessed for our ends.

Meditation has become a life hack to the gospel of self-optimization. Akin to an eerie scene from a Black Mirror episode, we’re powered up from meditation and optimized as human capital to increase our net productivity. Meditation apps are just one more tool in our toolbox to help raise a generation of lean, mean production machines. But it’s having the opposite effect. By forcing even nature’s spacious, awe-inspiring beauty into the claustrophobic confines of personal productivity, we further reinforce the notion that the world revolves around us and our optimized utility. That is a heavy burden indeed, and it’s not making us happier.

From Outreach Magazine  Deep and Wide: How Your Church Can Pursue Both

One of the earliest forms of mindfulness in the Bible was practiced by Israel’s King David more than 3,000 years ago. When he considered creation around him, unmediated by technology, he contemplated its wonder. David didn’t know then what NASA tells us now about our tiny place in a vast cosmos: We are one of 7.7 billion people who inhabit Earth. The earth and sun are part of a solar system. Our sun is one of at least 100 billion stars in the Milky Way. The Milky Way galaxy is just one of 100 billion galaxies in the universe.

But even without knowing the mind-blowing scale that science has since discovered, David knows just by observing nature with his senses that it is vastly bigger than he is:

“When I consider your heavens, the work of your fingers, the moon, and the stars, which you have set in place, what is mankind that you are mindful of them? Human beings that you care for them?” —Psalm 8:3–4

We are not unique snowflakes. We are literally the lowest numerical denominator possible—nano blips to the minus nth degree. Yet the Creator “crowned us with glory and honor” (Ps. 8:5). The implication is this: We don’t have an impersonal designer, but one who is mindful of us despite our smallness.

When we detach meditation from a Godward orientation and use it only for self-optimization, we limit our ability to be mindful of the God who is mindful of us. We numb ourselves to the beauty around that points to the ultimate Beauty—God himself. We risk ignoring the divine signs that Paul describes: “God’s invisible qualities—his eternal power and divine nature—have been clearly seen, being understood from what has been made” (Rom. 1:20).

Contrary to what meditation apps and their soothing waterfall sounds might suggest, nature does not exist to optimize personal productivity. It exists to point us to a personal God, without whom we will always be spiritually malnourished.

This article previously appeared on TheGospelCoalition.org and was adapted from the original on BreadTruth.com.