Home Features Why We Need to Slow Down 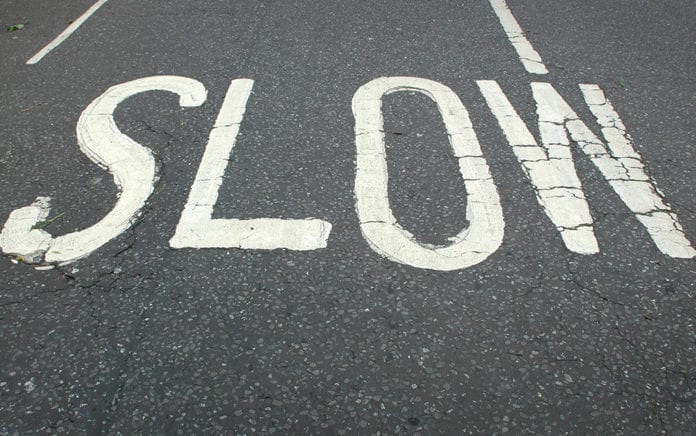 Sometimes we think experiencing the abundant life in Christ means living hard and going fast. In our Western culture, speed is typically synonymous with impressive. Unfortunately, buzzing through life often gets us nowhere—or lost. As Rollo May once said, “It is an ironic habit of human beings to run faster when they have lost their way.”

Ask anyone who knows me, and they will tell you I talk too fast and move too quickly. Frankly, sometimes-my-mouth-speaks-faster-than-my-brain-thinks (and apparently, I type that way at times, too). In my world, quick is good and supersonic is better. I was raised to believe that if you’re not early, you’re late, and I hate to be late, so I rush just about everywhere. I’ve been that way for a long time.

However, a truly epic and hope-filled life is rarely lived in the fast lane.

(You might want to slow down and read that last line again.)

Some of you move through life thinking it’s a race. You’re burning rubber and power-shifting hard trying to get to the next adrenaline rush. You don’t have time for anyone who can’t keep up with you. Anything that gets in your way gets demolished—quickly. You press the limits thinking to yourself, I’ll do whatever it takes to have whatever I want, and nobody can stop me! The problem is you’re running on fumes, and you think that’s a good thing.

As boys, my sons used to watch a Saturday morning cartoon called Teenage Mutant Ninja Turtles (TMNT). The stars were four teenage turtles named after Renaissance artists—Leonardo, Michelangelo, Donatello, and Raphael. Of course, being a responsible father, it was necessary for me to watch this show with my sons occasionally. I had to protect my kids from any potential heresy and make sure they weren’t exposed to unnecessary violence (smile).

My youngest, Isaac, was enthralled with TMNT. In fact, after almost every program he would go Ninja on his siblings as he yelled, “Cowabunga, dudes! Let’s kick some shell!” It was hilarious and annoying. In my great wisdom as a young sensei father, I once tried to explain to him, “Isaac, turtles are not really violent, they don’t move like lightning, and they don’t eat pizza.” His reply was classic, “Dad, they’re mutants; of course, they do!”

From Outreach Magazine  Reaching the Other Half of the Church

How do you reason with a star-struck boy?

Sadly, in our culture, we tend to make heroes out of mutants. We think the multi-millionaire executive who works eighty hours a week is a stud. The famous coach or player who lives on the road more than they live at home is someone too many wish they could become. We admire the politician or pastor who sacrifices all for the sake of the masses. We envy the Grammy-winning performer even though he or she lives without any margin and in dread of the paparazzi.

In our saner moments, we ask, “How do they do it and survive?” But with our next breath we whisper, “I wish I were famous.”

How do you reason with a star-struck adult?

We think jet-setting will make us happy. But a good life is rarely lived at Mach 1 or without any margins or room to breathe.

When you live a crazy life, you lose perspective. You often find it impossible to know peace. Everything and everybody are flying past the window of your heart so fast it all becomes a meaningless blur.

Without margin, there tends to be little joy or hope in your life because delight is found in the quiet places of your soul, and it is best experienced in times of reflection and rest. Margin leads to moments of hope because sometimes it’s the only place where you can breathe.

Hurry hurts. Rest restores. In fact, one of my favorite authors, John Ortberg, once put it this way: “Hurry is not just a disordered life. Hurry is a disordered heart.”

That’s always been his desire. Where did we get the foolish idea that it’s better or more spiritual to go, go, go until we’re empty?

On any given day, we are often overwhelmed with all the noise and activity of life on planet Earth. We live with the radio or TV continually blaring while our smartphone keeps alerting us to a million text messages.

From Outreach Magazine  The Ones Jesus Came to Save

Tragically, we keep trying to cram as much as we can into every moment of every day, but our over-productivity becomes counterproductive. More is not always more; sometimes less is more.

The “abundant life” of hope that Jesus wants for us is epic, but not insane. It is full, but not crammed.

Sabbath. Margin. Rest. This is the pathway to a truly holy and healthy existence.

Maybe you’ve noticed that knowing and doing are sometimes two very different things. I can know that bacon is bad for me (some of you just panicked), but if I love the pleasure of copious amounts of pig fat more than I love low cholesterol, then doing something about it is highly unlikely.

Most of us know we need downtime. We know that running on empty is a recipe for disaster. Even if we’re not very religious, we understand the idea of Sabbath.

The problem comes in carving out the time for recovery and refreshment. And let me be clear—it never happens by accident and only becomes a reality when we get intentional about creating margin in our lives.

What person, task, activity or experience tends to suck the bone marrow right from you?

What empties your tank?

We all have to deal with the reality of doing difficult things or stuff we dread, but you can’t live without margin all the time and thrive.

Restoration and recuperation happen when you cease from life’s regular duties and struggles, and in the place of those things, you do whatever builds you up.

So, what fills you up?

What helps you feel alive and refreshes your soul?

Don’t wait for a convenient time to engage in these life-giving activities. Do them now. Do them often.

Here is a profound paradox: Life is too short to live it too fast.

So don’t just stop once in a while to smell the roses; instead, take the time to plant a rose bush and invest in your future.