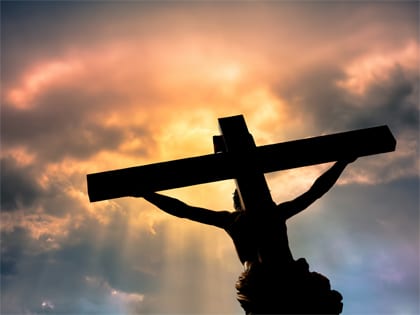 Even though Jesus died relatively soon, the 18 hours of his passion were filled with unbelievable trauma, pain and suffering.

To envision the pain and emotional stress Jesus endured, it may be helpful to share an analogy.

Imagine your family has allowed you to go by yourself to see some old friends you haven’t seen in many years. They live in a remote, desolate area of the Texas desert. You want to surprise your friends, so you don’t tell them you’re coming.

You turn off the main highway and travel for miles on a dusty dirt road, then fail to negotiate an unexpected sharp turn. Because of the heat you neglect to buckle your seat belt. The car rolls over, and you are thrown out of the car. As you fall out of the car, your scalp is cut by the edge of the door.

You land on your back in a bed of prickly cacti. You suffer multiple cuts to your back. The back of your leg lands on a sharp rock which cuts the artery behind your knee. You cannot get up because the door of the overturned car has your legs pinned. You can’t find or reach your cell phone. Your suitcase has fallen on your chest and you can’t move it. You have trouble breathing. Every time you try to move, the pain becomes excruciating. You are literally abandoned. You see your blood seep out of your body and over the next few hours you become faint, as you slowly go into shock. You know you are dying, and there’s nothing you can do.

Jesus must have looked pitiable on the cross. After being picked up from the supine position on the ground and raised onto the cross, he would have experienced orthostatic hypotension. This is what you feel when you suddenly get up, if your blood pressure is low. It takes a while for your heartbeat to catch up, pumping the blood you need to your brain. You will feel faint and dizzy and may actually pass out.

Jesus would be pale and ashen. His skin would be blood colored from the hematidrosis. Many scholars say that hematidrosis would have caused his skin to be friable and tear easily. His back would have been covered with dirt, except where it was starting to be washed off by fresh bleeding from the wounds of the scourging. It was a sunny day. (Jerusalem has an arid climate, getting only a few inches of rain annually, usually in the autumn.) There was no shade for him.

Jesus probably vomited. We know from emergency room experience that victims of trauma frequently vomit. The pain and shock causes the stomach and intestines to become immobile. The continued production of stomach fluid causes it to accumulate in the stomach, and since it can’t go down into the intestine, the patient vomits it up.

The danger is that it could get into his trachea and lungs, producing what is called aspiration pneumonitis. This causes congestion in the lungs. Recall that Jesus already had fluid in his lungs from the scourging and the falls.

This would have led to poor oxygenation of the blood, causing him to breathe faster (tachypnea). Because of the unrestrained falls he experienced on his way to Calvary, Jesus probably developed pericarditis. The bruising of his chest caused inflammation in the pericardium (the sac around the heart). I have been told by patients who had open heart surgery that if they get pericarditis, it is very painful. Pericarditis causes shortness of breath, heart palpitations, low-grade fever and an overall sense of weakness and fatigue and cough.

Jesus had not slept for 28 hours. Sleep deprivation would have intensified his fatigue and pain.

Jesus had nothing to eat or drink after the Last Supper. He was dehydrated. His mouth was dry. His tongue would tend to stick to the roof of the mouth. The throat muscles would be weak. This, plus chest congestion, fatigue, and weakness, would make it difficult to talk. We know from biblical references that Jesus spoke only seven times, in short phrases.

Around noon the sky became dark. Scholars write that Jesus faced the east (today we bury our loved ones facing east). If so, he could see the glistening gold top of the temple.

It was the Day of Preparation. The Jewish people were urged to come to Jerusalem to celebrate the Passover. An unblemished lamb, known as the korban pesach or “paschal lamb,” was set apart on Nisan 10. It was observed for the next four days to be sure it was pure. It was then brought to the temple on Friday for the high priest to sacrifice it, so that it could be roasted for the Passover meal.

Jesus had come to Jerusalem on Sunday to offer himself as a sacrifice for us. He proved by his actions in the temple on Monday and Tuesday that he was without blemish, just as the sacrificial lambs were to be spotless. As the priests were slaughtering the lambs for the Jewish Passover, Jesus was dying as our sacrificial lamb for our Passover.

At the same time the priests were draining the blood from the lambs, the lifeblood was being drained from our Savior, the consequence of the crowning of the thorns and his wounds. By this unselfish act he became the new Passover, the Passover of the new and eternal covenant.

The next time you hear, “Behold the Lamb of God who takes away the sins of the world,” you may better appreciate how Jesus became our Lamb of God.

The first letter of Peter states: “Realize that you were delivered from the futile way of life your fathers handed on to you, not by any diminishable sum of silver or gold, but by Christ’s blood beyond any price: the blood of a spotless, unblemished Lamb” (1 Peter 1:18-19).

God our Father sent his beloved Son to earth to suffer for our sins. He freely accepted the human reaction to the immense pain, such as screaming or protesting. The only humanistic response recorded occurred shortly before he died, when he acknowledged, “I thirst” (John 19:28). People who have been deprived of water for a long time described severe thirst as the most tormenting emotion imaginable.

From Outreach Magazine  Easter: Bring 'The Thorn' Experience to Your Church

As Jesus was hanging on the cross, he became weaker and weaker. His blood pressure progressively dropped, his pulse increased and became erratic, and his breathing became shallow and labored, as the result of progressive shock.

Crucifixion was design to produce a slow, bitterly painful, cruel, brutal, excruciating, onerous, inhumane, searing death. There is no consensus as to how long it took to die on the cross. It is my impression that one to several days seemed to be the average. One source said that it once took 14 days, but this is not verified. Jesus died in a short time.

“Pilate was surprised that Jesus should have died so soon. He summoned the centurion and inquired whether Jesus was dead. Learning from him that he was dead, Pilate released the corpse to Joseph.” (Mark 15:44–45)

So why did Jesus die so soon? My belief is the strongest evidence suggests that Jesus died of cardiac arrest (heart stoppage) as a complication of traumatic and hypovolemic shock. Shock occurs when inadequate oxygen and nutrients are being brought by the arteries to the cells of the body. The initial insult may be temporary, but if the lack of oxygen and nutrients continues, the cells are permanently damaged, and eventually death occurs.

Even though Jesus died relatively soon, the eighteen hours of his passion were filled with unbelievable trauma, pain, and suffering. I have been studying Jesus’ death for many years, but I still cannot comprehend the enormity of his sufferings. How wonderful is it that he so loves you and me that he put himself through this, just so we can gain our salvation, if only we put our faith in him and follow his teachings.

For a more detailed account of the medical reasons behind Jesus’ death, order this book from Amazon.com. Profits from the sale of the book are being donated to organizations that support the Christian presence in the Holy Land.