Home Resources Your Christianity Is Only as Real as You Are 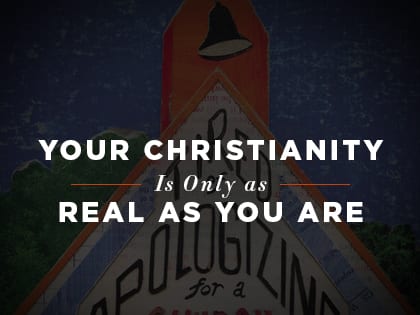 “Every time a clergy person pulls a punch, the laypeople wonder, ‘Are these really the only problems our pastor has?'”

I am not a big fan of massive revival meetings where people get born again and saved. Mostly because it hasn’t happened to me. I hear from others that it’s actually a pretty cool experience, but I can’t speak to that. I don’t have fun at a large stadium watching basketball or rock bands, so why would religion work any better? But for people who have been through it, baptized at a revival, a megachurch, a tent rally, or even these weird spectacles when bodybuilders for Christ break boards and then baptize you, I’ve heard that it’s an experience of a lifetime.

But I also have heard that, afterward, many of the newly saved often wonder what it was all about. Was it the emotion of the moment? The length of the service? The heat? The power lifters for the Lord? Was it really life-changing?

I’ve met lots of people who have been saved and they pretty much keep their original personalities, for better or worse. I don’t believe that one single moment does it for most of us, even if there is a great musical sound track like this song that goes with it.

Just as I Am

Old hymns are like sausage: better to consume them and move on without undue reflection. I love “Just as I Am.” But like many old hymns I love, I can’t think about it too much. And again, like sausage, I prefer to ignore the blood part of that hymn and stick with the yummy first bite, “Just as I am.” I really connect with that part.

Many people associate this hymn with altar calls and revivals when, at the end of big emotional rallies, the preacher calls people to come forward and “get saved.” In a packed stadium, rivers of people leave their seats and flow down front to receive Jesus as Lord and Savior, and this is the hymn they would always sing.

Billy Graham, the most famous revival preacher of modern times, always wanted this hymn sung during his crusades’ altar calls because he believed that this hymn brought him to faith.

So given my skepticism of the events that are so synonymous with this song, I am surprised to love this old revival hymn as much as I do. Whenever I sing it, my heart gets full at the idea that God loves me “just as I am,” which I take to mean God loves everyone that way: the saved, the unsaved, the selfish, the selfless, the many religious people, and the Nones. We really are all loved, and we don’t have to join any group to get that.

I’m in religious community for other reasons, including getting to hear and in some cases accidentally memorize old hymns that I am not sure I believe, but they seem to believe in me. Especially when I get to verse three, which seems to contradict the first two verses.

From Outreach Magazine  Does Christianity Need to Be Saved?

Just as I am, though tossed about
with many a conflict, many a doubt,
fightings and fears within, without,
O Lamb of God, I come, I come.

“Just as I Am” was written by someone during a period of doubt. Charlotte Elliott wrote the hymn in England in 1836, and it was included in a book called The Invalid’s Hymnbook.

Charlotte Elliott was part of a large, vital family who had a great passion for ministry. But she was beset by a series of health crises that left her, at the young age of thirty, a complete invalid. Essentially she could only spend her time in bed or lying on a sofa. Her brother, a clergyman, committed his life to establishing St. Mary’s Hall, a school designed to give the daughters of poor clergymen a good education for a nominal fee. The family regularly sponsored bazaars, fairs, and fund-raising events for the benefit of the school. On the eve of a particularly big fund-raising bazaar, Charlotte experienced something like a dark night of the soul. She went to bed, and she felt worthless. She thought, “I’m an invalid. Everybody in this family, everybody in my community, is working for something good, and I can’t do anything.” She decided that life was not worth living, and she began to doubt that there was a God or a purpose for her life. She was up all night in total despair.

The next day was the big bazaar, and her family and friends would be buzzing with activity. And she lay on a sofa in the drawing room, at a distance, watching all the good work happen. That was when the text of this hymn came to her, and she just started to write, as if she were taking dictation. All of a sudden, out of this place of pro- found doubt and despair, she wrote a hymn about a God who loved her, just as she was, without one plea.

Today a book with a title like The Invalid’s Hymnbook could never be published. It would be considered offensive in a world in which no one wants to be considered sick.

From Outreach Magazine  Crossroads Cincinnati: The Fastest-Growing Church in America, 2017

I’m a big proponent of serious efforts to find a religious community. So when the host of a Canadian radio show asked me off air how he might find a church like the ones I was discussing on air, I was surprised. He had access to bright and engaging religious figures through his work. He of all people should be able to find a church. “Have you visited any churches lately?” I asked.

“Well, how many did you visit?” I asked, predicting a small number.

“Twenty-one?” I gasped. “Well, how recently?” Was this a professional grudge holder against religion who joined and left churches for every adult year of his life?

“Over the last two years,” he said.

“You mean to tell me you have spent the last two years trying out all twenty-one churches in your town?”

“Well, I live in a very small town, and there are twenty-one churches.”

“It doesn’t sound like you live in a very small town,” I said, because at some point I wanted to be right about something. “Because small towns don’t have twenty-one churches. One thing I am sure of is that you do not, in fact, live in a small town.”

“I guess not,” he said, giving me that one point. It was the only sloppy thinking I could catch him on. I actually felt pretty awful about my assumptions, especially after he described a thoughtful journey, with observations of what he had learned along the way. He pointed out what was beautiful about one style of worship, and where somewhere else he heard a particularly well-crafted sermon. He had looked into denominations and visited websites. This guy clearly wanted to find a church. He was willing to put that effort into it. He went to visit all twenty-one churches in his town. But why couldn’t he find one? Were his standards too lofty? Or was something else going on?

Finally, I asked him, “What was so wrong with them? They don’t sound too bad to me. No church has it all. Couldn’t you even find one that you liked?”

“Oh, it wasn’t that,” he said. “I liked a lot about all of them. It’s just that they wouldn’t like me. I’ve done bad things in my life. I don’t belong with those people.”

“Didn’t they say God loves you despite all that?” I asked.

“Sure,” he said. “They all say that. But I don’t think I believe it. I can’t love everybody. And if they knew me, or what I think, they wouldn’t want me there.”