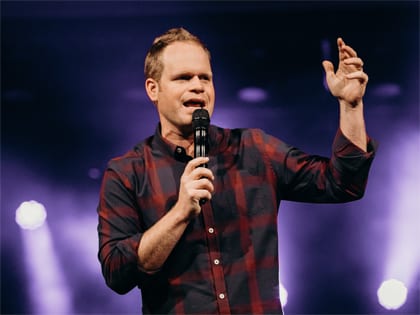 “I thought if I’d just had more authority to be able to call the shots, then I could have been a better leader. And that’s a lie.”

Scroggins started at North Point as a facilities intern (or, as he describes it, the “VP of Nothing”). With Andy’s help, he’s learned over the years how to navigate the tricky business of earning influence and trust—and therefore becoming a leader—before he had the authority and the title to go with it. Scroggins’ new book, How to Lead When You’re Not in Charge: Leveraging Influence When You Lack Authority, shares the leadership practices he’s learned, and continues to learn, about how to be influential when you’re not the one who calls the shots.

What have you learned from Andy Stanley about leading when you’re not in charge?

I genuinely enjoy working for Andy. He’s a phenomenal leader and boss, and he’s super empowering. He hates hearing, “We can’t do that,” or, “There are too many constraints,” or, “We wanted to, but we just don’t do that here.” He’s very empowering to say, “Hey, if you have a great idea, give it a shot. If you have something you want to try, put a plan together and let’s talk about it.” He doesn’t want anybody at any level sitting on an idea that could make our organization better and not trying to execute on it.

I had a big lightbulb moment several years ago. Andy asked me to swing by his office after a meeting. I was leading one of our campuses, and the larger organization provided the curriculum and all the assets we needed on Sunday. He had seen a couple of messages we had done for students, and he knew I had a background in student ministry. He had questions about the messages because he didn’t think they were as great as they could’ve been.

My instinct was to blame, to go, “Well, because they didn’t give us the best materials …” He just kind of looked at me puzzled and eventually said, “Why didn’t you make it great?”

North Point is a very empowering organization, so if you’re not stepping out and trying to create some waves and move things forward, it really is your fault. That was the day it hit me. I was being a victim, being passive, sitting on my hands. I felt a lot of resignation. I thought if I’d just had more authority to be able to call the shots, then I could have been a better leader. And that’s a lie.

Talk about the difference between influence and authority.

We all know people who have authority because they have the position, the office, the title—but they don’t have influence. They have the gun of leadership. They can say, “Hey, I’m going to fire you if you don’t do this.” We’ll do what they ask because they could fire us, but authority-based leadership doesn’t work for long.

And the flip side is true. We all have been around people who have very little authority but have tons of influence. If they said, “This is the direction I think we ought to go,” we listen because of who they are. We trust them. So I think that was a big distinction that was helpful for me to understand. I realized I didn’t have to have all the authority to be able to make waves and move us forward. But I could begin to cultivate influence from the seat I was in at that moment.

I realized that this message really brings hope to everyone. Now I feel compelled to tell our new interns, “Hey, you have something within you to make this organization better. You might only be here for three months, but you have ideas and experiences that can help shape this organization. You can make a change from the seat you’re in.” I find it to be a very inspiring message.

From Outreach Magazine  3 Signs of a Transformation Church

It’s helpful when senior leaders are intentional about creating a culture of empowerment in their organization. But who is this message really for—those senior leaders, or the many nonleaders who want to have influence even though they’re not in charge?

I feel like a lot of times, for many senior leaders, saying, “Here’s how I want you to work while you’re here,” to a younger, lower-position leader feels self-serving. So for me, I really feel like this is not a senior-leadership message. It’s a message for the 99 percent of the workforce not fully in charge—and that’s most of us. I felt for the longest time in my career that I was sitting around waiting to move to the next level, to get the next promotion. I finally decided, “If this is the spot I’m in, I’m going to have as much influence in this spot as I can.” I think this is the rallying cry for those of us who feel like we’re not in charge, who feel like we’re just minions who don’t have a ton of authority.

What does it look like for someone to begin leading when they have no authority?

In Part 2 of the interview, Clay Scroggins talks about the balance between positivity and realistic thinking, how to respectfully challenge a leader, and more.