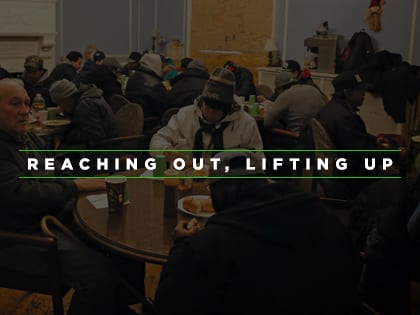 “Just as it takes a village to raise a child, it takes community to emerge from poverty.”

Nick, once a successful business owner, found himself living on the streets of New York City after losing his job, his wife and his dignity. Struggling to find purpose, he stumbled upon a church called New Life Fellowship, where he found food, favor, companionship and compassion. New Life Fellowship, with an average weekend attendance of 1,300, exists precisely for this reason: to cultivate and invest in the community so that those living in the area may thrive.

Over 20 years ago, New Life formed a community development corporation (CDC), a separate nonprofit organization designed to provide programs and offer services that promote and support the community. The heart of what spurred the formation of the CDC is Matthew 25:40. The founding pastor, Pete Scazzero, had no interest in starting a church in a middle-class neighborhood, but rather wanted to be with a cross section of the globe.

“In the beginning, church staff would literally have to step over homeless individuals in order to enter the building,” says Redd Sevilla, executive director of New Life CDC. “Being located in this spot made the people in our congregation more vulnerable to the community, but we were exactly where we wanted to be.”

The CDC enabled New Life to enter into the public space, open a health care center and receive funding from sources that were uncomfortable giving to churches.

The church staff recently interviewed 200 community members about their predominantly immigrant neighborhood. Folks maintained that the biggest obstacle to living there was the language and the culture barrier.

“When you’re not bridging culture or speaking the same language, it’s difficult to grow relationships,” says Sevilla. “We believe that the great elements of the kingdom of God here on Earth will be birthed through relationships in the community.”

Last year, the CDC launched “success groups” to help people get out of poverty. The program is based on a model by Family Independence Initiative (FII), a national nonprofit that leverages the power of information to illuminate and accelerate low-income families’ initiative to improve their lives. Engaging poverty in an innovative way, the organization is based on the premise that individuals will be able to achieve their personal, professional, financial and health goals if they have both opportunity and community support.

“In other words, if you have friends, it’ll work,” says Sevilla.

To make the transition, the church replaced experts like social workers and case managers—who typically advise low-income families on where to go and what to do—with small groups. This way, the primary source of support was a group of people, not a singular relationship with a case manager. Then, they incentivized success groups by promising to give a payment to families who met once a month and kept a journal that outlined their progress.

Sevilla first read about success groups in a New York Times article. It made him question why the church isn’t involved in economic mobility. Sevilla spent three years investigating the model, and what he found astounded him.

“I saw low-income families on fire for their future,” he recalls. “They were walking out of welfare, walking out of government subsidies and opening up a whole new world of opportunity for themselves.”

For years, churches have wrestled with how best to come alongside a family that is struggling financially—and do so in a way that honors and empowers them. When folks feel a sense of belonging, everything changes. Sevilla has witnessed such transformations firsthand.

From Outreach Magazine  Shootings, Grace and the Gospel—An Interview With Pastor Eddie Bevill of Parkridge Church

Nick, the former businessman who found himself at New Life Fellowship, suffered a massive stroke at the church and was taken to the hospital where he flatlined for five minutes. By God’s grace, Nick survived. When he awoke, he felt compelled to serve and has been an active recruiter for God ever since.

He found a man named Ivan asleep on a park bench and invited him to the food pantry for nourishment, warmth and hope. After connecting with the community, Ivan insisted on paying it forward by serving as a manager of the food pantry. Though he still lacks stable housing and must walk 45 minutes a day to church, he’s committed to helping others.

New Life Fellowship strives to help community members find relief by meeting their immediate needs, restoration by cultivating community and opportunity, and reinvestment by giving back to the community.

“These men demonstrate the beautiful work of the restorative power of God,” says Sevilla. “They also exemplify the significance of reinvestment by working to create a greater neighborhood rather than relocating to a new one.”

The theology behind success groups is rooted in Genesis 1–2, the “blueprint of humanity.” Humanity was made to flourish, to lead and rule, to have authority over one’s environment, to create and cultivate a productive garden.

“The achievement of those things comes through people—and through access to funding,” says Sevilla. “That’s the reality of it. Just as it takes a village to raise a child, it takes community to emerge from poverty.”