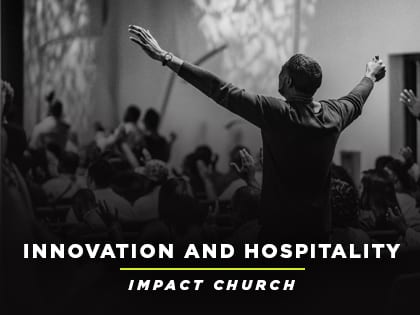 No. 56 Fastest-Growing: Impact Church in Georgia Stands Out in the Bible Belt

“I feel God in everything I’m doing,” Lovett says. “I did not have that sense of connectedness before I went to Impact Church.”

“Everyone is welcome,” he says.

At its start nine years ago, the East Point, Georgia, church met in a middle school—in a community that already had about 40 established churches.

“We couldn’t just say, ‘Hey! We’re a new church,’” Brown says. His team knew they’d have to find a way to do church differently than the other churches in town. And from meeting in a renovated warehouse, to the innovative use of technology, to Brown’s culturally relevant sermon topics, that’s exactly what they do—hence the church’s tagline: “Doing Church Differently.”

Another of the church’s values is humility, which means no spotlighted megastars. Being in the Bible-Belt South, Brown didn’t want Impact to become another large church built around another large personality. “Introduce people more to the brand than the person,” he says.

To deflect attention, the pastor introduces himself on Sundays like this: “Hello, my name is Olu Brown, and I’m one of your pastors.”

According to Brown, people are hungry for servant leaders, and they find it refreshing when they’re not bombarded with pictures, text and videos of a pastor’s face, name and personality. Try to find Brown’s picture on the “Meet Our Team” page on Impact’s website, and you’ll find the image of a computer monitor instead.

From Outreach Magazine  5 Ways to Prep for Easter

Regarding image, Brown says he hopes to present a view of Jesus that most people aren’t used to. Members of Impact’s predominately black church have grown up seeing a white Jesus, and white angels, in the pages of their Bibles.

“We’ve taken those things to be absolute,” Brown says. But because of these images, certain cultures feel like they don’t fit in the context of Scripture, and some people who grew up in church are “totally out of the loop,” according to Brown.

To combat these feelings of alienation, he often discusses Africa’s place in the Bible’s global story. Brown says he wants to help his congregants reconnect with and see themselves in Scripture. “Those are things you’re not going to hear in a regular sermon,” Brown says.

Impact’s embrace of technology is part of its appeal. Leaders encourage attendees to tweet and share sermon quotes from their phones during the sermon. There are flat-screen TVs in the restrooms. Giving kiosks allow tithes and offerings to be given via credit card, since many people don’t carry cash for an offering basket.

“We still push and press technology,” Brown says. “We see it as a tool, not just a way to be cool.”

Brown believes Impact has grown partly because he and his team are willing to stretch themselves and see things differently. He encourages open dialogue. Even young summer interns have Brown’s ear.

Every quarter, Impact’s leaders give the congregation the scoop on everything from volunteer hours, to finances, to the number of followers on the church’s Twitter account.

“We share those with the world because we realize the world wants to be connected,” Brown says.

Recently, Impact hosted community forums following Brown’s sermon series on spirituality and sexuality. If members ever have disagreements with something Brown says in a sermon, he’ll meet with them to talk about it.

“Fellowship is more important than being right,” Brown says. “We’re all different, but all essential to the kingdom.”