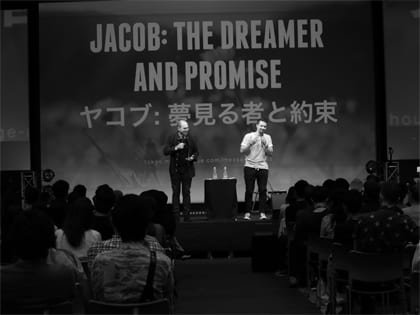 “The key is touching their hearts. They want a community that answers questions and prays for them.”

“Have you heard of Jesus?”

This actual conversation is typical of ones Pastor Rod Plummer has had in Japan, a country that has one of the lowest percentages of Christians in the world—less than 1 percent. Such numbers may discourage some pastors, but they actually motivated Plummer and his wife, Viv.

“We arrived with a strong vision that God was going to move in Japan,” he says. They had seen God work through church planting in Thailand, the Philippines and Indonesia, so in response to God’s call they, along with their two sons and 10 mission interns, left a large, thriving church in their native Australia to plant what is becoming a movement of churches, starting in Tokyo.

“We always had the belief that we’d meet people who are open,” Plummer says. “Jesus said open your eyes and look at the fields because they’re ripe for harvest.”

They started by hanging out at Starbucks and at universities where they might meet English-speaking students. As the internet came of age, they developed an inviting web presence. Many Japanese students go through six years of English education, giving them a basic grasp on the language, and for many, an interest to learn it better.

“One of my biggest surprises,” Plummer says, “is how rarely we receive rejection.”

They start with the idea that there is a God who is the Creator and who has a plan. “That’s a good connection point with the Japanese heart: destiny and specialness,” he says. It’s little surprise that the favorite verse in the congregation is Jeremiah 29:11, “’I know the plans I have for you,’ declares the Lord, ‘plans to prosper you and not to harm you, plans to give you hope and a future.’”

The next step in the conversation is to move to Christ, explaining that the reason God has a plan is because of what Jesus did on the cross. “It’s a journey of six to 12 weeks, and sometimes more,” Plummer says.

From encounters like these, Lifehouse Church in Tokyo was born—and that’s the approach to outreach they’re still taking 15 years later, only now with more teams and thus more conversations. To date, Lifehouse has planted 20 churches, 14 of which are in Japan. The combined impact draws almost 4,000 people on a weekly basis.

The worship at Lifehouse is lively with lots of laughter. Much of the worship service is bilingual, the message coming in both languages, with preacher and interpreter standing side by side. This actually serves as a leadership-development pathway, with the Japanese translator often becoming the preacher in about six months.

“We’ve been big on cell groups,” Plummer says. “Japanese groups grow fast, and they talk deeply about discipleship issues. Every week I meet with a bunch of leaders, and my wife meets with the women.”

For the Tokyo congregation, that translates into about 100 current life groups of approximately eight people each (and a worship attendance of about 1,500 at the Tokyo campus). Besides teaching the Word and praying as a group, “a lot of care occurs at the cell level, from hospital visitation to prayer for the sick,” Plummer says.

But the teaching is not schoolroom style. “They don’t want lectures,” Plummer says. “The key is touching their hearts. They want a community that answers questions and prays for them.”

The cell is where many learn to read and apply the Bible personally, such as the S.O.A.P. method of reading: Scripture, observation, application and prayer. “They want to know what God says,” he observes.

Many receive Jesus in their small-group community, often after several months of Bible input, healthy relationships and being touched by God. “Once they experience salvation, Japanese people make some of the best disciples in the world,” he adds.

It’s widely known that as World War II ended, U.S. occupying forces, led by Gen. Douglas MacArthur, enacted widespread military, political, economic and social reforms in Japan between 1945 and 1952. What’s largely forgotten is the fact that the he also addressed the spiritual vacuum that he found. “Send missionaries,” he pleaded to a number of religious groups, “and Bibles.”

After an initial response, the engagement by various church groups waned. As a result, in many Japanese churches today, a lot of people are now 70 to 80 years old. They had been reached as young adults just after the war, but their churches did not find ways to reach succeeding generations.

Plummer wonders if today marks another window of receptivity by the people of Japan. “I believe the harvest here has been ripe for a while. This nation is open for the gospel. It just needs relevant, young-hearted workers. Plus, a bit of finance behind us couldn’t hurt either.”

Lifehouse Tokyo may draw the largest attendance of any individual church in Japan, but Plummer is the first to affirm the need for more.

“To reach Japan we know we can’t do it alone,” he says. We will need many hundreds—even thousands—of churches planted to reach this nation of over 125 million people that God loves.”