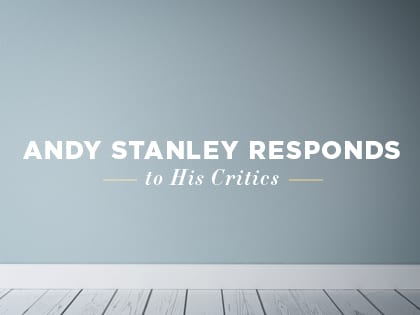 After controversial sermon, Andy Stanley crafts response to critics that explains his perspective on message and method.

“Pay close attention now,” Andy Stanley warned his congregation at the beginning of his Aug. 27 sermon at North Point Church in Atlanta, where he is the senior pastor. “If you listen casually you will misunderstand me.”

It was good advice.

Over the space of 37 minutes, Stanley gave a sermon that, depending on your point of view, was either a brilliant example of apologetics for millennials—or something close to heresy. Here are just a few of Stanley’s statements from his talk.

“If the Bible is the foundation of our faith, as the Bible goes, so goes our faith. It is next to impossible to defend the entire Bible. And while YOU may be able to hang on to it, your kids and grandkids and the next generation will not.”

“Christianity does not hang by the thread of ‘the Bible tells me so.’”

Unsurprisingly, the words have sparked controversy. A blog post at 828Ministries.com claimed, “Megachurch heretic Andy Stanley continues to cross the line into full blown humanism and abandon all sense of orthodox Christianity in pursuit of his carnal purpose driven dreams.”

A much more measured but highly critical response came from pastor and author David Prince, who in a recent post said, “According to Stanley, defending the Bible in its entirety as completely true, is too great a burden, and wrongly puts the Bible at the center of the debate. He speaks as if his view is a cutting-edge apologetic position for our time or an innovative evangelistic strategy, but what he is advocating has historically had a name—liberalism.”

However, Andy Stanley claims all these accusations miss the point of what he believes, as well as the audience he is very intentionally trying to reach. In a lengthy response [READ IT HERE], Stanley outlined several clarifications he would want people to know about his recent message.

“First,” Stanley begins “I believe the Bible is without error in everything it affirms. I believe what the Bible says is true, is true.”

He goes on to outline the theological influences he embraces, his father Charles Stanley’s fight for the inerrancy of Scripture, and his education. Referencing the 1978 evangelical conference that crafted one of the seminal statements of Scripture’s inerrancy, Stanley said, “So for anyone out there who is still a bit suspicious, I affirm The Chicago Statement on Biblical Inerrancy. Heck, I studied under the man who co-authored the whole thing.”

Why the Sermon Was Controversial

But Stanley freely and unapologetically admits his teaching style can breed confusion, at least among a certain group of people.

“[I have a] habit of saying what I suspect skeptics are thinking about something I’m saying,” he says. “In my effort to state their assumptions, I sometimes sound as if I share their assumptions. For listeners accustomed to preachers taking every opportunity to correct, chastise, and reprimand unbelievers, my approach is confusing.

“But for the father whose 23-year-old son agreed to give church one more chance … well … folks like that hug my neck and send me gift cards.”

For Stanley, that quote illustrates his driving core—a passion for a millennial generation he says is walking away from a faith it knows well.

Why This Controversial Approach Is Necessary

“If we’re going to reach the unchurched, underchurched, dechurched, and postchurched with the gospel in a culture that’s trending post-Christian, we must rethink our approach,” Stanley claims.

Stanley believes many pastors still operate from the assumption that biblical authority is a persuasive tool to use in a gospel presentation, a premise he openly questions.

“Appealing to post-Christian people on the basis of the authority of Scripture has essentially the same effect as a Muslim imam appealing to you on the basis of the authority of the Quran,” Stanley says. “You may or may not already know what it says. But it doesn’t matter. The Quran doesn’t carry any weight with you. You don’t view the Quran as authoritative. Close to half our population does not view the Bible as authoritative either.”

Read Andy Stanley’s full statement, “Why ‘The Bible Says So’ Is Not Enough Anymore” »