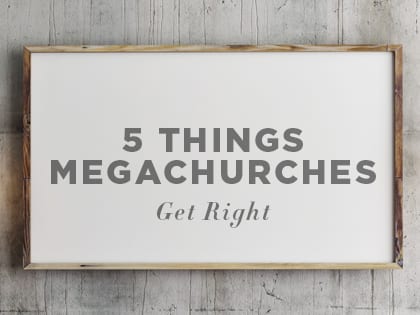 Phil Cooke: “Size doesn’t make for bad experiences—people do. And I have yet to find a church without people.”

As the saying goes, “The world is going to hell in a hand basket.” There’s never been a greater challenge for world evangelism. There are plenty of social problems like hunger and homelessness that we face here in the United States. Christians are being marginalized more than ever, religious persecution is rampant on a global basis, and that’s just the beginning. But what are we still debating in the church today?

It’s hard to believe, but I sometimes think we Christians spend more time criticizing large churches than anything else. Are there problems in 2,000-plus member churches? Of course. But I work with churches of all sizes for a living, and I can tell you that for every case of shallow teaching, bad theology, leadership failure, financial impropriety or whatever the criticism du jour happens to be, I can point to a long list of 50-plus member churches that are guilty of the same things.

You had a bad experience at a megachurch? Grow up. There are plenty of bad experiences to be had in small churches, too. Size doesn’t make for bad experiences—people do. And I have yet to find a church without people. Fallen humanity is no respecter of church size.

From the perspective of a person who is passionately interested in how Christians engage today’s culture, here are five reasons I think it’s time for a moratorium on megachurch criticism.

1. Megachurches are not as shallow as you think.

As Roger Olson writes on his blog:

“Baylor sociologist Rodney Stark’s (research study) ‘What Americans Really Believe’  lauds the strengths of megachurches as compared to small churches. “Those who belong to megachurches display as high a level of personal commitment as do those who attend small congregations.”

In fact, much of the pioneering work on the most respected Bible study resources and materials are coming from the leaders of large congregations.

From Outreach Magazine  How One Church Does It: Tailor-Made Connections at The Church on the Way

2. Megachurches make a dent in communities.

America has cities and towns where it seems like there are tiny churches on every corner. But a single megachurch in that same town gets far more buzz and word of mouth. That’s not to downplay the importance of small churches, but when it comes to sharing their message outside their walls, most might as well be invisible. Large churches generate publicity, which generates conversations, which generates more opportunities to share Christ with friends and co-workers.

Like it or not, we live in a media-driven culture. Yet most small churches don’t have the resources, know-how or interest to use media to reach their communities. Larger churches have the financial resources, talent and expertise to use media effectively. Their websites, video presentations, printed material and social media campaigns are far more effective and well-executed. Most do an excellent job of sharing the message of the gospel through media channels that reach enormous numbers of people.

4. Megachurches are making a global impact.

Most leaders of large churches I know are remarkably innovative when it comes to effective mission outreaches. Plus, they send enormous amounts of money to fund missionaries in countries around the world.

Megachurches are motivated and aggressive about planting new churches. Throughout inner cities, suburbs, remote locations and more, megachurches are raising up new congregations in amazing numbers.

For these and other reasons, I think it’s time to remember we’re all on the same team. After all, what pastor in his right mind is going to turn away potential worshippers? If people want to attend a particular church, let them. Besides, what’s the right number of members anyway? If you want to worship in a small community, great. But give the same freedom to others who want to worship in a large community.

From Outreach Magazine  David Gustafson: A Fresh Look at Evangelism—Part 1

I recognize that some people may just have an irrational beef with large churches, so I probably won’t change their minds. But problems are problems, and as a preacher’s kid who has spent my entire life inside churches, I can report that many large congregations are doing some amazing things.

So, I say it’s time to celebrate and support churches of all sizes, because the most important thing to remember is that the church is the hope of the world.