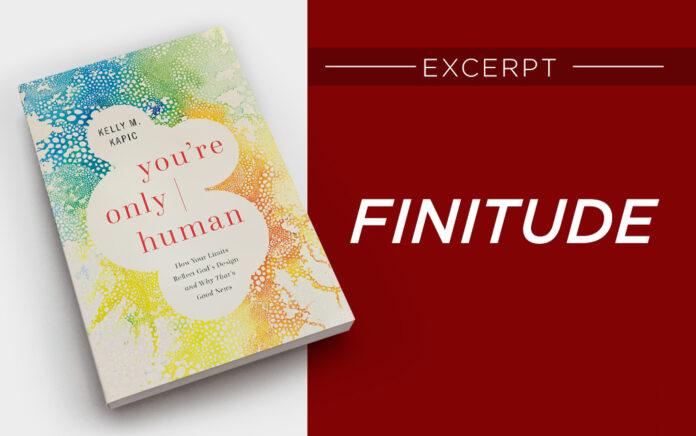 Finitude is an unavoidable aspect of our creaturely existence.

Creaturely finitude is less an idea we discover than a reality we run into.

Todd and Liz had been married and childless for many years, so Liz’s sudden pregnancy filled them with joy and expectation. They were going to have a baby but hadn’t found out yet if it was a boy or girl, let alone picked the baby’s name. Without warning, however, events spiraled out of control. The baby was born prematurely, at just twenty-five weeks, three days after Christmas. Their joy had turned to alarm. Unsure of how long he would live, they immediately named him Findley Fuller after their mothers’ maiden names; Liz and Todd told me that in the uncertainty of whether he would live or die they chose a name for their son that reflected his place in a larger family and a larger story. He was not alone; to the God of the living they entrusted their son and his story.

In previous centuries, or even previous decades, medical practice would not have been able to save Finn’s life. He needed twenty-four-hour care, and even with medical advances the prognosis didn’t look great. Would he make it through the night, through the week? His system was very fragile: he struggled with everything from breathing to seizures, from infections to dangers to his young eyes. Each day brought not only fresh hope but also new obstacles. Finn was a strong little guy and a fighter, but the odds didn’t look good.

A few weeks into his son’s fight for life, despite his exhaustion, Todd found the strength to send out a CarePage update on their son’s condition, commenting, “All of this brings loads of new fears and anxieties to Liz and me. But we trust in God’s faithfulness, mercy, and love. And we have confidence in the NICU medical staff. We acknowledge fear, but we cling to hope.” Todd then reminded us that he was writing on Martin Luther King Jr. Day and quoted from this American minister and civil rights advocate, who once said, “We must accept finite disappointment, but we must never lose infinite hope.” And then Todd signed off, “God is able.” He didn’t mention our limits as an excuse for the doctors to give up but rather as the context for their best efforts. Only God was and is infinite.

The vulnerability of their son’s life reminded Todd and Liz of their own tiny and comparatively weak place in an incomprehensibly huge and threatening cosmos. Standing in the hospital beside Findley, they were freshly aware that, from the odd asteroid to everyday germs, the parts of the world that can hurt us often operate beyond our control or even prediction. They had given their newborn son into the care of doctors, but even more so into the care of God. Still, even with this, how does one “accept finite disappointment” while maintaining “infinite hope”? Excellent nurses and doctors were working as hard as they could to preserve little Finn’s life, and Todd and Liz knew that the infinite God of grace and love cares more about them and their child than they ever could, so they took some comfort there. But when the brokenness of the world hits our human limitations, it strains our emotions, will, and understanding past their abilities.

All of us bounce between the illusion that we are in control and the world’s demonstration that we are not. Thank God Finn has both survived and flourished as the months and now years have passed: as you can imagine, his baptism and first birthday were great celebrations! But the memories of this frightening and humbling season of life remind Todd and Liz and their friends that the boundaries of our abilities to handle life are closer than we would like.

Whether through tragedy or simply as the result of aging, we all are repeatedly reminded that we are fragile and dependent creatures. But it is not just our bodies that face us with these upsetting limits—we also see them in a coworker with greater intellectual gifts than ours, or a fellow athlete who is so much faster, or an aging parent whose waning emotional and psychological stability has threatened the health of our relationship with them. We have far less control of the world and even of ourselves than we would like to imagine. Some people respond by living as passive victims, while others aggressively seize as much control as possible.

We know our actions matter, and matter a lot. A doctor who studied hard is usually better than one who simply wanted to pass exams. Parents who want to be thoughtful about rearing their children, seeking to avoid mistakes they inherited from their own parents, are better than negligent guardians. Unfortunately, patients still die in surgery under the care of excellent physicians, and earnest parents mistakenly assume they can get it perfectly “right,” ignorant of their own blind spots, larger cultural factors, and personality differences. What we do matters. We can and do change things. But when we suppose that we can control all our circumstances, we soon find that we can’t. We don’t say the words, but we live as though the weight of the world were on our own shoulders. And it exhausts us. Behind the patient grin on our faces we hide a lingering rage about the endless demands that must be met, unrealized dreams, and relational disappointments.

The odd thing is that, even when we run into our inevitable limits, we often hang on to the delusion that if we just work harder, if we simply squeeze tighter, if we become more efficient, we can eventually regain control. We imagine we can keep our children safe, our incomes secure, and our bodies whole. When I complain about getting older, my wife sometimes laughs and says to me, “You have two options: either you are getting older or you are dead.” Denying our finitude cripples us in ways we don’t realize. It also distorts our view of God and what Christian spirituality should look like.

Finitude is an unavoidable aspect of our creaturely existence. We run into it constantly and in different ways. If we are paying attention, we can see it. It doesn’t take a car accident or an unexpected hospital visit for us to discover our limits and dependency. But are we listening? Do we recognize the signs? They’re all around us. Far too often our lives testify to the fact that we believe we really can and should do everything. Thomas Merton, drawing on an observation by Douglas Steere, once observed,

There is a pervasive form of contemporary violence to which the idealist most easily succumbs: activism and overwork. The rush and pressure of modern life are a form, perhaps the most common form, of its innate violence. To allow oneself to be carried away by a multitude of conflicting concerns, to surrender to too many demands, to commit oneself to too many projects, to want to help everyone in everything, is to succumb to violence. The frenzy of our activism neutralizes our work for peace. It destroys our own inner capacity for peace. It destroys the fruitfulness of our own work, because it kills the root of inner wisdom which makes work fruitful.

Merton wrote this over fifty years ago, but his concern is even more relevant now than it was then.

Excerpted from You’re Only Human by Kelly M. Kapic, ©2022. Used by permission of Baker Publishing BakerPublishingGroup.com.