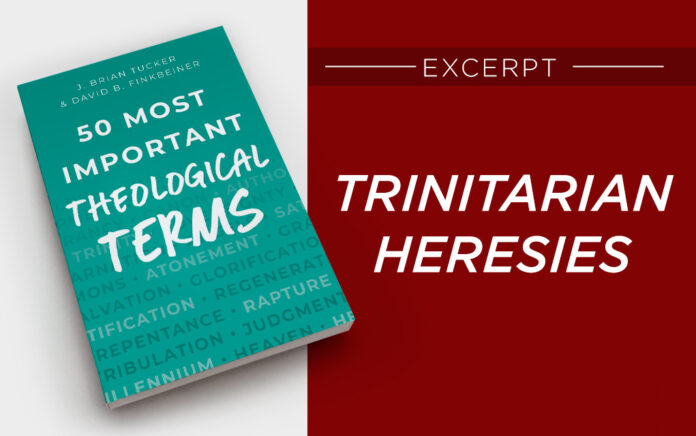 In relation to the Trinity, heretics have usually failed to maintain – or have overemphasized – one of three vital planks.

Sometimes in class I will jokingly say, “Heretics are God’s gift to the church…” I wait to let that settle in for a moment and then conclude, “…because they allow us to clarify the truth.” In relation to the Trinity, heretics have usually failed to maintain – or have overemphasized – one of these three vital planks: (a) God’s oneness and threeness, (b) the deity of Christ or the Holy Spirit, and (c) the distinctions and equality between the three persons.

The view that Jesus was a mere man until His baptism, when the Spirit fell on Him and He received God’s power in a unique way, has come to be called dynamic moarchianism, or adoptionism. This second-century view wanted to protect monotheism, but did so at the expense of Jesus’ deity. The First Council of Nicaea in 325 rejected this adoptionist view: “We believe in one Lord, Jesus Christ, the only Son of God, eternally begotten of the Father.” Adoptionist views are still present among theologians today, and they create problems doctrinally since they (a) destabilize the notion of Jesus’ sacrifice as the God-man, and (b) raise the specter of merit as a means for acceptance before God.

Others, wanting to maintain monotheism and the divinity of the Father, Son, and Holy Spirit, thought the best way to describe the Trinity was with names representing modes of being. This view came to be known as modalistic Monarchianism, or Sabellianism. A third-century theologian, Sabellius taught that God revealed Himself as the Father in the Old Testament, then as the Son during the life of Jesus, and finally as the Holy Spirit during the age of the church. One God, three subsequent modes. A difficulty with this view, though, is that it doesn’t deal satisfactorily with the texts where all three members of the Godhead are simultaneously active or speaking, such as at Jesus’ baptism (Matt. 3:16-17), His transfiguration (Matt. 17:5), and even in His prayers (John 14:16; Luke 23:46). Another significant problem, known as patripassianism, is the belief that the Father suffered or died on the cross in the appearance of Jesus. This was deemed unacceptable and so the church responded with the doctrine of the impassibility of God. The Father could not die; only Jesus, the God-man, by adding human nature, could suffer and die.

Tritheism is the view that the Father, Son, and Holy Spirit are three distinct deities. This is a form of polytheism and is the opposite of modalism. This view has never been seriously considered historically, though there may be a sense that some forms of contemporary social trinitarianism come close to this view. It’s likely that some church attenders hold a soft form of this view, especially if they view the members of the Trinity sitting in heaven and holding court in a manner similar to Zeus, Hades, and Poseidon among the Greek pantheon, seen for example in the Percy Jackson and the Olympians novels or films.

Macedonianism is the view that the Holy Spirit is not fully divine; it gets its name from Macedonius of Constantinople, who is thought to have held it. This fourth-century heresy is also known as pneumatomachianism, which means “spirit fighters,” for these heretics were resisting the church’s teaching that the Holy Spirit is fully God. Some sought to understand the Spirit as a liminal figure – neither God nor a creature. A close contemporary analogy would be “the Force” in Star Wars. This heresy was condemned at the First Council of Constantinople in AD 381. This is why, rather than saying “may the Force be with you” in our benedictions, we declare, “May the…Holy Spirit be with you” (2 Cor. 13:14).

Unitarianism rejects God’s tri-personality in its emphasis on God’s unity. It emerged from Arian teachings, which denied Christ’s deity, and thus was rejected as heterodox. The contemporary expression of this view is traced to Faustus Socinus (1539-1604) as he revived the idea that only God the Father is truly divine and that Jesus, while deserving honor, is not. God’s tri-personality and singular essence is not rational. Thus Jesus, while being a good example, does not share in the identity of the God of Israel. This perspective became central to the Enlightenment’s perspective on God, with its emphasis on rationality. The major warning for us from Socinus’s example is to never assume the Trinity is simply irrelevant, illogical, or irrational. In addition, understanding the Trinity is important for thinking accurately about the atoning work of Christ on the cross – Jesus’ death on the cross is not just an example to follow – it is much more.