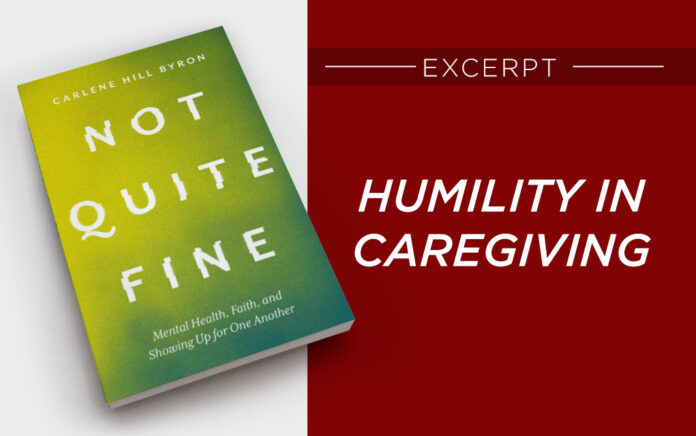 Excerpted From Not Quite Fine By Carlene Hill Byron Humility in Caregiving Pete Costas was still relatively young in his career as a Salvation Army officer the Sunday evening that a fidgety, distracted, and somewhat disheveled young man walked in well after the service had started and seated himself at the center of the front […]

Pete Costas was still relatively young in his career as a Salvation Army officer the Sunday evening that a fidgety, distracted, and somewhat disheveled young man walked in well after the service had started and seated himself at the center of the front row. Captain Costas was just beginning his message when the man’s hand shot up in the air. He had a question.

Captain Costas answered it and returned to his message. A few sentences later, the hand shot up again.

This time, after answering the question, Captain Costas asked a favor. He pointed out the other people in the room and asked the young man if he thought he could hold his questions until the end so the others could hear the rest of the message. Afterward, the captain said, the two of them could go together to his office and he’d answer all the man’s questions.

The young man nodded his agreement and quickly sat on his hands.

After the service, the young man joined Costas in his office and rapid-fired questions at him about God, salvation, and what it meant to be in relationship with Jesus. Costas referenced John 3:16 in his answer.

As Costas tells the story, the young man’s face went blank for a second and then he said, “Can you say that again? They told me to ask you to say that again.”

Costas asked, “Who told you to ask me that?”

The young man answered calmly: “I have sort of like a mind meld with aliens, but they can’t communicate with you directly. They told me to ask you to say that again.”

The young man pushed on. “Now this Jesus,” he asked, “died for the sins of the world?”

“They want to know if he died for the sins of the universe,” he said.

That was a new one. Costas thought for a minute.

“That’s exactly what they wanted to hear!” the young man exclaimed. And he got up and, with a spring in his step, walked out.

Just as missionaries approach new cultures with humility and love, so we too must approach those whose minds carry them to places unfamiliar to us. They may be an older adult with dementia. They may be a friend with a psychotic disorder. They may be a new acquaintance who has passed through unimaginable fires of war and dislocation. The competent caregiver walks humbly with a sufferer where that person goes, trusting that as we go in and go out, God will keep all of us safe (John 10:9-10).

When we take our turn giving supportive care to those who suffer from cancer or a traumatic brain injury, we don’t concern ourselves with diagnoses or treatment strategies. Those are the province of medical professionals, and we readily admit them outside our expertise. We concern ourselves, instead, with the person who is suffering. We attend to her anxiety about the diagnosis or lack of diagnosis. We listen empathetically to the patient who may be prepared to battle the illness or ready to let it take him down. We comfort the family, which may be shredded by disagreements over care strategies. We walk humbly into our caregiving responsibilities, knowing that our expertise is limited and our God’s love infinite.

THE HIDDEN VIRTUE OF HUMILITY

Humility is a traditional virtue that can be hard to understand in the twenty-first century. It describes a willingness to follow, not lead; to do good unnoticed instead of expecting honors. Dictionary definitions sometimes describe it as a state of low self-worth, which is not at all accurate. Humility is more correctly a state of accurate self-assessment, as the apostle Paul prescribes in Romans 12:3-8.

U.S. culture obscures humility with our belief in earned achievement and opportunity. We describe ourselves—not very accurately—as a meritocracy, a place where rewards consistently flow in direct proportion to talent and hard work.

In a perfect meritocracy, winners deserve their successes, and losers deserve to fail. As meritocracy plays out in the United States today, notes Harvard political philosopher Michael Sandel, winners develop the excessive pride of hubris, as they feel responsibility for their achievements. Losers are humiliated, as they believe that they are personally responsible for their failures, even when vaguely aware that outcomes are significantly shaped by circumstances of birth and heritage they did not control.3 In a meritocracy, we are not just humbled by our limits; we are humiliated to discover ourselves limited.

Failing to acknowledge ourselves as limited is, of course, the sin Satan encouraged in the garden of Eden. “You will be like God,” he hissed (Genesis 3:5), and our first parents were all too willing to go along. The idea that some things might just be beyond the limits of our own created bodies, minds, or competencies is not easy for us to accept. Nor do we readily acknowledge the possibility that some of the good we enjoy might have come from a place beyond our personal strivings.

To be able to live in humility requires recognizing that what one is and has are all gifts from God—including the talent and energy that make greater achievement possible for some.

Humility is a core virtue in our mental health ministries. To look on self and others with humility requires us to look past the standards that demonstrate merit in one particular culture, and to look at whether we are as God asks us to be. It requires the kind of humility that missionaries ideally bring to their cross-cultural communications of good news, when they acknowledge that they have arrived but must learn to understand the place where they’ve landed.

To practice humility when we encounter differences requires us to abandon both fear and pride. The person who is afraid of another can’t listen well or extend a gracious welcome. Those who look at the other from their own prideful sense of self are not able to learn in any meaningful way. When we are friends to those whose mental health conditions differ from our own, we have to be willing to not understand: why they don’t want to go for a walk on a lovely day, why they didn’t return the call, why they believe that they caused it to rain by going outside to smoke. It’s okay to not understand, even when we want desperately to understand well enough to plunge in and fix whatever’s wrong. In the 21st century West, we expect mental health problems to be as readily overcome as one of the illnesses for which antibiotics proved a twentieth-century miracle cure. But repair may not be our responsibility as we walk alongside people, with God, on their long mental health journey.

Excerpted from Not Quite Fine: Mental Health, Faith, and Showing Up for One Another by Carlene Hill Byron. ©2021 Herald Press. Used with permission. HeraldPress.com.