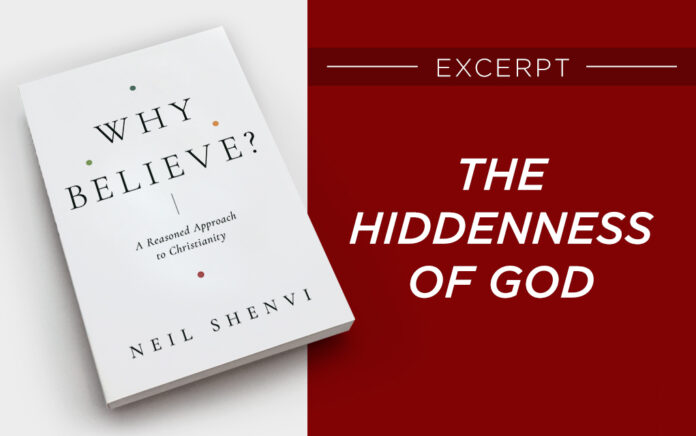 If the Christian God exists and loves us, and if our eternal destiny hangs in the balance, why isn’t the evidence for his existence absolutely undeniable?

The hiddenness of God is often proposed as evidence that God does not exist. Atheists who advance this argument can affirm that there may be some evidence that God exists, such as the Big Bang, the fine-tuning of the universe, and the existence of objective moral facts. However, this limited evidence is far less than what we ought to expect. If the Christian God exists and loves us, and if our eternal destiny hangs in the balance, why isn’t the evidence for his existence absolutely undeniable? Surely, a God who could create the entire universe could routinely perform unmistakable miracles, like regularly sending angels to materialize in the center of Times Square in the presence of thousands of witnesses. The absence of such extraordinary evidence is, then, an indication that this kind of God does not exist.

To answer this objection, we need to take a deeper look at the biblical doctrine of sin. According to the Bible, sin is not merely the breaking of God’s rules; it stems from our inherent posture of rebellion toward God. To put it another way, if faith is essentially trust in God, then unbelief is essentially mistrust of God. We don’t merely doubt his existence; we doubt his goodness. We distrust his claim that he knows what is best for us and that surrendering to his rule over our lives will bring us joy and freedom. The claim here is not that intellectual objections don’t exist or that they are unimportant, but that they are not the primary obstacle between us and God. As surprising as it might seem, lack of evidence is not the ultimate reason for our unbelief.

If that claim sounds difficult to accept, a thought experiment might help. Imagine you have put this book down and are about to head to bed when Jesus suddenly appears in the middle of your living room. He shows you the nail prints in his hands and performs miracles, multiplying your avocado toast and fish sticks and turning your tap water into wine. In other words, imagine, for the sake of argument, that he gives you whatever evidence you need to completely convince you intellectually that he is God, that he died on the cross for your sins, and that he rose from the dead. The question I’d like you to consider is not whether you would believe that God exists or that Christianity is true, because we’re granting for the sake of argument that these issues have been settled for you. The question is this: How do you feel about him?

At that moment, what if Jesus said to you: “Now that you know that I am God, I am calling you to become my disciple. That means you must take up your cross daily, dying to your own desires and demands, and seeking my will in all your decisions. I must be more important to you than any human relationship and even more important to you than your own life. You must put to death all the sins that you love and that seem so natural to you, even if it feels as difficult as plucking out your right eye or cutting off your right hand. Your money, your friendships, your sex life, your career goals, your entertainment, your entire ethical framework, your view of the Bible—everything must be reevaluated in light of who I am. I want you to devote your whole life to my mission, serving others, loving them, sacrificing for them, warning them about God’s coming judgment, and pointing them to the forgiveness of sins and salvation that only I offer. Tell all your friends and family the bad news that they are sinners and the unimaginably good news that I died to rescue them from hell. Devote yourself to prayer, to worship, to friendship with other Christians, to membership in the local church. And do all of these things not grudgingly, but joyfully.”

Be honest: how would you feel about Jesus now? I’ll be honest. Part of me would feel claustrophobic. Even as a Christian, part of me wants to call the shots in my own life and wants to be my own ultimate authority. God’s demand for our complete allegiance makes us feel uncomfortable. Why? Because deep down inside, we want to be our own gods. If that’s the case, isn’t it clear that evidence is not the ultimate issue? Even if we had all the evidence we needed to convince us intellectually that God exists and that Christianity is true, there would still be a volitional, emotional barrier between us and God.

That is why, at least from a Christian perspective, the objection from divine hiddenness is weak. I agree that God could have provided even more evidence than he did, so much evidence that atheism or skepticism of any kind would cease to exist. But why think that a world of theists who loathed God would be significantly more desirable to God than our current world?

God’s purpose is to change hearts, not merely to change minds. Once we grant that a person can be completely intellectually convinced that God exists and still fail to love God, we have to reevaluate whether God would necessarily provide more evidence than he has. If none of us can honestly say that there is nothing in the Bible that disturbs us, nothing about God’s total claim over our lives that threatens us, and nothing about God’s moral commands that offends us, then why think that lack of evidence is our main problem or that God ought to provide more?

Excerpted from Why Believe? by Neil Shenvi, ©2022. Used by permission of Crossway, a publishing ministry of Good News Publishers.