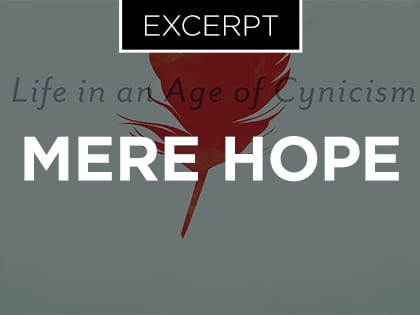 J.R.R. Tolkien coined the term eucatastrophe to describe a story’s sudden happy turn. Where do we find such a hope?

“But this I call to mind, and therefore I have hope.”
—Lamentations 3:21

This exchange from Roald Dahl’s children’s classic, The BFG, brings to light what we often see and feel in our fallen world. Current events, long-standing and systemic sins, and often our own hearts and actions, are frequently wrong-side up and cause more harm than a normal catastrophe. Rather, what we see daily in our age of cynicism is a “catasterous disastrophe”! Dahl’s words are clearly made up, but they are close enough to actual words to convey meaning, and they also remind of another word coined by an author.

In 1938, J.R.R. Tolkien published a landmark essay, perhaps his most foundational, “On Living Fairy-stories.” In it, while seeking to defend the goodness of happy endings, he coined the term eucatastrophe. A eucatastrophe is built from catastrophe—literally “to turn down”—and the prefix eu-, meaning “good.” Thus, in a story with eucatastrophe, at the point of greatest tragedy, you have the workings also of the greatest good. In a later letter to his son, Tolkien wrote, “I coined the word ‘eucatastrophe’: the sudden happy turn in a story which pierces you with a joy that brings tears.”

What is remarkable about this defining word is that Tolkien meant it, and clearly his works, to “lead us out of literature and into faith.” Tolkien said, “In the ‘eucatastrophe’ we see in a brief vision that the answer may be greater—it may be a far off gleam or echo of evangelium in the real world. … The Birth of Christ is the eucatastrophe of Man’s history. The Resurrection is the eucatastrophe of the Incarnation. This story begins and ends in joy.”

To live a life of mere hope is to live knowing that our story ends in joy. To no surprise to you by now, I find Tolkien himself a helpful guide to help us further understanding.

“I am glad that you are here with me,” said Frodo. “Here at the end of all things, Sam.” I never expected to get a lesson on living mere hope from the concluding chapters of Tolkien’s The Lord of the Rings, but I did. The hero and his faithful companion, comprising the remnant of a fellowship that set out on a journey to destroy evil and see the return of their king, lay exhausted and helpless on an erupting mountain of volcanic proportions with no cause for hope of rescue. Yet in that moment they had the peace and security that only victorious soldiers must know when they, though dying, have saved people and nations.

What was their source of hope? Even though the world collapsed around them, they knew that evil was ultimately defeated. Though they expected to die and not find escape, they rested in hope, knowing the truth for which they persevered now reigned. That and remaining fellowship led them to express gladness and joy there “at the end of all things.” Of course, as the story goes, the very climax of the eucatastrophe in The Lord of the Rings occurs just when it appeared that all hope was lost, as good triumphed in the form of rescuing eagles. The imagery of eagles in Tolkien’s work is remarkable for portraying this type of eucata­strophe. In Exodus 19:14, God refers to his deliverance of Israel from Egypt as his bearing them “on eagles’ wings.” Isaiah 40 speaks of eagles’ wings as a source of strength for the weary in a passage that almost depicts Tolkien’s scene exactly:

”Even youths shall faint and be weary, and young men shall fall exhausted; but they who wait for the Lord shall renew their strength; they shall mount up with wings like eagles; they shall run and not be weary; they shall walk and not faint” (Isa. 40:30–31).

Of course Frodo and Sam do fall exhausted and are swept up on eagles’ wings to safety. When they awake, they find restored fellowship and the return of the king. I never expected to get a lesson on living mere hope from Tolkien’s fellowship, but there it was even in The Lord of the Rings.

In Tolkien’s story, there is great hope and joy for those of us laboring as Christians in an age of cynicism—and thankfully, as we have seen, that is only a reflection of the shining light of truth of these themes found in the Bible. Likewise, in 1 Peter 4:7, the apostle Peter explains that “the end of all things is at hand.” By that he means that he and his readers were living in the last days before the return of Jesus. Since that time until our very own, humanity has been living at the verge of the end of the world, but that is not a cause for despair or handwringing. Peter’s point was focused rather on how one is to live at the end of all things, and he spends the next few verses underscoring this for believers.

Peter explains that while a Christian should have his eyes fixed and his hope set on the soon and certain return of Jesus, he should be using his spiritual gifts, whether serving or speaking, all for the glory of God. What, then, is the source of our hope and on what task are we to have our minds and hearts set? Until the end, whether one eats, drinks, preaches, trains, waters, reaps, types, writes, shares or disciples, he should be doing these things as the biblically prescribed means for carrying out the Great Commission to the glory of God. Such it is, too, with mere hope. Until Jesus returns, Christians should look down at their founda­tional gospel hope, look in at their fountain of living hope, look out at the need for a flourishing global hope and look up and focus on future hope.

From Outreach Magazine  Today's Moment of Truth: Jesus in Genesis?

As we now bring our journey of examining our mere hope to a close, I conclude with four areas where I think our hope is best expressed. Regularly, we are looking down, in, out and up as we encounter trials, battle despair and seek to serve others. As J.I. Packer rightly says, “Hope is a tender plant, easily crushed and extinguished, and every believer must budget for having to battle for it.” These four areas are comple­ments to that ongoing part of our Christian life. To put it another way, these are how mere hope is lived.