Home Resources Books Healing Our Divisions Through the Spirit of Love 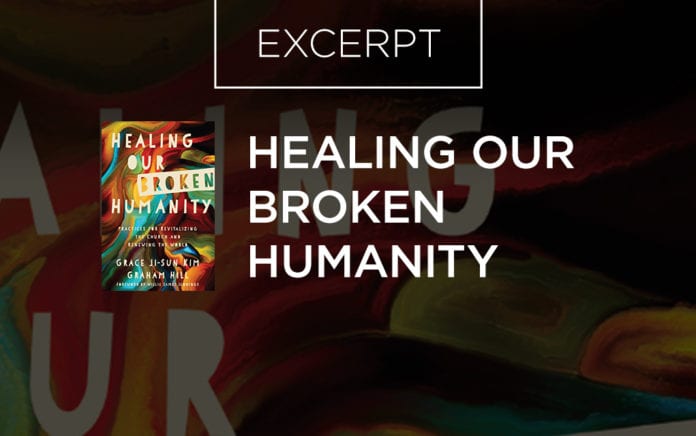 The Spirit gives us strength to love God, our neighbor and the stranger.

Growing up in a Korean immigrant family was not easy for me (Grace). Our family immigrated to Canada when I was five years old. We were all faced with many difficulties, encountering pains and obstacles from the day of our arrival. I had to learn a new language and assimilate into an alien culture. I always felt out of place as a foreigner at school and in the larger community.

Some of my experiences were a result of an established system of racism and sexism that was rooted deep in the white American world I confronted. As a child with many shortcomings, it was nearly impenetrable. The institutionalized racism and sexism of the dominant culture seemed to oppose me from the outset. Thinking of my own childhood, of the flooding memories of utter toil, pain and stereotyping that eventually led me to be marginalized by other children and the larger society, is saddening.

Just as we as people have grown from our own small and naïve stature into a more developed self, so has the issue of institutional racism and sexism. It has manifested into something big and so strongly integrated into our culture that it often goes unnoticed. Secular society ignores the destructive realities and therefore does little to dismantle them. But it is our Christian responsibility to work at eliminating the evils polluting and weakening our society, communities and churches. This can be achieved by recognizing these evils, when and where they occur, and then eviscerating the oppression and dismantling the patriarchy that pervade our Judeo-Christian tradition.

People of color have historically been ghettoized in the margins of society. They have been neglected, discriminated against, and stereotyped in North America, Australia, and other contexts. Pushed to the perimeters of their communities, people of color are sensitive to experiences of oppression. The wounds are raw and painful, not only from a brooding history but the present continuation of this mistreatment. The intersection of racism and sexism deepens the wounds and compounds the oppression that sidelined women of color experience.

Paris was attacked by ISIS terrorists on November 14, 2015. It was devastating; ISIS claimed responsibility for the deaths of over 130 people. Since this event, there have been many forms of xenophobia, racism, Islamophobia and ill feeling toward Muslim minorities. Many people are now afraid of Syrian refugees, who are fleeing for the safety of both their family’s and their own lives. Some Americans are now refusing to accept refugees into their states as they fear that they are terrorists. President Trump banned entry of refugees from seven predominantly Muslim countries for 120 days. All this is a reminder of past actions. The United States enacted the Chinese Exclusion Act of 1882, the first ban of any ethnic group into the United States. Chinese who were already in the United States had to carry identification at all times, making it difficult to travel. This ban was in place until 1943.

Can we continue to live in fear of those who are different from “our crowd”? How can we ignore the plight of those who are being chased out of their country and seeking refuge in a foreign country? Are we following God in all this fear, blame and neglect of others, or are we neglecting God’s commandment to love our neighbors?

In this broken world of misgivings, misrepresentations and misunderstandings among the diverse human family created by God, Jesus revealed our need to explore the margins and create a pathway toward healing and hope. Jesus’ family was in fact a refugee family who fled into Egypt as Herod ordered the slaughter of young children. By definition, Jesus was in fact the other who was pushed to the margins of society. As a poor Jewish peasant teacher from Nazareth, Jesus was marginalized by the leaders in Jerusalem. He stood in solidarity with the marginalized lower classes. Jesus incarnated life, practiced kingdom teaching, and was crucified on a criminal’s cross, revealing God’s transformative love working for justice, peace, and liberation.

From Outreach Magazine  The Surprising Truth About World Changers

The healing of divisions in this world happens through God’s transformative Spirit of love. With restless hearts, we often long to connect with God, the other and the community that is in touch with God’s creation. Through the practice of prayer our longing is transformed into a Spirit of love. The Spirit gives us strength to love God and our neighbor.

As we accept our differences and work out tensions between peoples, we understand that it is the Spirit of God who can bring us together. Being in connection with one another is a formative power that can strengthen our very existence. Everything that exists comes into being by virtue of connectedness. The Spirit-led life helps us to stay connected to God and each other in deep solidarity. This is especially the case as we serve together in the work of social transformation. The Spirit is the true source of restoring right relationships and enabling respect and love for others, even others who are completely different from us.

The Spirit of God energizes us for the work of healing in the world. The Spirit of God emboldens and enables us to respect and welcome the other. All people are made in the image of God, and we are called to love our neighbor just as we love ourselves. Since we are all created in the image of a God who loves us completely and eternally—no matter who we are or what we do—we are called to love all people with that same extravagant and inclusive love.