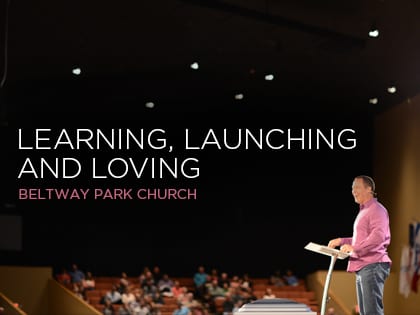 Amy and Austin’s divorce papers were drawn up and ready to be signed when Austin was involved in a horrific car accident. When he woke up from the crash, his pain was intense, but so was his desire to work on his marriage. He convinced his wife to attend a marriage retreat at Beltway Park Church, and that’s when everything changed.

“I realized that as soon as I said ‘yes’ to God, it was no longer about me. It was about him,” says Austin. “In marriage, [too,] it’s not about me but how can I serve you?”

Beltway Park Church, located in Abilene, Texas, is racially diverse with a population consisting of roughly 65 percent Caucasian, 25 percent Hispanic and 10 percent African-American. But an intense north/south divide exists in the community based on school districts, economics, and race.

Numbers were dwindling at Beltway Park until leaders realized that they couldn’t adhere to the “you come to us” mentality. “Instead,” says Lead Pastor David McQueen, “we needed to go to them.” That’s when the church launched a second campus.

It wasn’t the first time they had pursued such an endeavor. Seven years earlier, they tried launching a new campus, but it failed due to a lack of preparation. “We thought we could smack our brand on it and be good to go, but that lasted all of five months,” recalls McQueen, who has been at the church for 17 years. Ultimately, they closed the doors and called it a lesson learned.

When Beltway Park tried the second time, they found gracious church leaders from similar-sized communities who mentored them through the process.

“We learned that the most important thing is having a core team that’s on board and heart-deep with you,” says McQueen, who adds that equally vital is hiring a campus pastor who is committed to the mission.

The fact that the campus church is in the same town helps a lot, too, because it means pastors can meet regularly to continue the work. Plus, with both churches being in Abilene, the launch team can be sizable—Beltway Park sent 500 to launch their new campus.

The church’s active involvement in multiple community outreach initiatives is another huge reason for their continued growth. For example, the Re|Engage marriage ministry that Austin and Amy attended serves as a popular community outreach tool for desperate couples who arrive at the seminars on the brink of divorce but leave with healing, hope and hearts for Jesus.

In addition, the men’s ministry is very strong. McQueen stresses the importance of breaking through to the males of the congregation because he says that when men get involved in the church, women and children follow.

So, why is it that some families avoid coming altogether? McQueen has found that a primary reason people aren’t in church is because of old church wounds. “When folks feel hurt at church, the natural thing to do is leave,” says McQueen. “But when they do leave, rarely do they look elsewhere for a new place to worship.”

It’s a sad situation, but one that Beltway Park Church is making phenomenal strides to change. They’re doing so not just by growing their own church but also by helping others flourish as well.

From Outreach Magazine  Mental Illness and the Church

“One of our greatest joys is praying for, contributing to and aiding with new church plants in the area,” says McQueen. “I want to see the body of Christ take root and multiply in our entire community.”