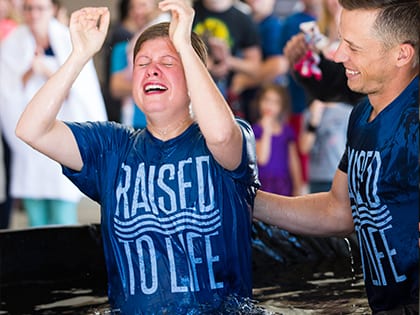 No. 19 Fastest-Growing: Love Is Shown, Not Just Preached at Action Church in Florida

Three years ago, Eddie Rivera was standing outside a grocery store in Winter Springs, Florida, when someone handed him a gift card and an invitation to Action Church. Members of the church, whose maxim is, “We’ll do anything short of sin to connect with people who are lost,” pound the pavement daily, distributing free gift cards, laundry service, food and gas. These aren’t bribes—they are “no strings attached” gifts of love.

“When you give something with no catch, people listen,” says Rivera.

That certainly was the case for Rivera, who, despite his initial skepticism, visited Action Church and was blown away by the love that enveloped him—not just on that first Sunday but also over subsequent weeks.

“Shortly after I came to Action Church, my dad got sick and the pastors were there for me—at the hospital, praying for me, caring for me,” says Rivera. “It didn’t matter that they barely knew me. I was God’s child, so they loved me.”

Ultimately, Rivera accepted Christ as his Savior, then began serving at the church and was recently hired as the outreach coordinator.

“My journey is mind-boggling,” says Rivera, who is thrilled to help heal a hurting city, noting that nearby Sanford, Florida, was the place where 17-year-old Trayvon Martin was killed, and, less than 20 miles away, Pulse nightclub in Orlando was the site of the deadliest mass shooting in U.S. history.

“There’s a lot of social divide and racial tension between the community and city officials,” says Rivera. “Being in the middle of that, we are intentional about loving on families. We want them to know that God loves them.”

Action Church, now in its third year of operation, chose the name based on the book of James, which states that “faith without action is dead.”

“I’m definitely a ‘don’t tell me you love me, show me’ kind of person,” says Justin Dailey, lead pastor of Action Church. “So, at least once a month I’ll ask our members, ‘What are we giving? Where are we serving? What are we doing to let people know that we’re here for them and that Jesus loves them?’”

Dailey attributes church growth in part to the fact that the staff has created an easy system for people to get connected. In line with a mission statement that vows to reach people where they are and connect them to God, when visitors attend weekend worship, they are invited to participate in “action steps,” the church’s assimilation process to get involved on a team or in a small group.

“I grew up in a great church, but it was hard to figure out the best way to get involved,” says Dailey. “Here, we make it easy to find our church and then find your part to play in our church.”

A key to their growth may lie in questions rather than answers. With locations among three disparate demographics—in the cities of Winter Springs, Oviedo and Sanford—Dailey wanted to be sure they catered their outreach projects to suit the needs of the area.

“We took our model [of connecting with people who are lost] and formed it to the personality and needs of the community,” he explains.

From Outreach Magazine  Back to Basics: Faith Church

Although the church has grown enormously in recent months, it hit a plateau at the start of 2017. In February, they launched a massive marketing campaign around a relationship series that they predicted would help grow attendance. When it didn’t, Dailey and his staff were left scratching their heads. Then Dailey had an epiphany.

“God wasn’t going to give us more people and more resources if we weren’t going to steward them well,” says Dailey. “God reminded me that I was leading, so to fix it, I needed to look in the mirror. It was a humbling lesson.”

Dailey notes that when leaders are in love with God and are growing themselves, they can then create a place for others to grow. By the same token, when leaders stagnate, the organization follows suit.

“I’m the capacity, but I can also be the bottleneck,” explains Dailey. “If I’m pursuing God, if I’m loving my wife, if I’m being a great father, then I’m creating a capacity for the people who follow me to do the same.”

This explains why members of Action Church go out of their way every week to minister to everyone in the community—from inmates to strippers to those struggling with suicidal thoughts.

“We do life with these people,” says Rivera. “We give them hope in Christ.”