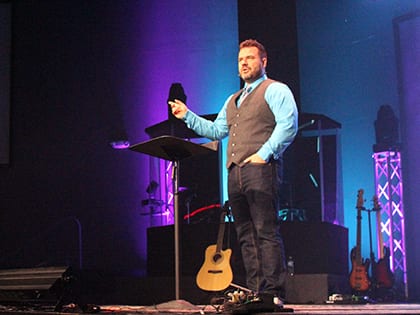 No. 74 Fastest-Growing: 2|42 Community Church in Michigan Encourages Members to Be the Church Everywhere

James Damman had driven by 2|42 Community Church, an eye-catching building in Brighton, Michigan, many times. One day on a whim, he decided to stop and take a tour. From the get-go, he was skeptical. Upon stepping inside, he encountered a giant soccer field, a restaurant and a movie-theater-sized auditorium.

Having been raised in a traditional church, he wondered, “Where’s the sanctuary?”

Damman didn’t think much more about 2|42 until six months later, when he was facing divorce—only this time when he entered the doors, he was brokenhearted and open-minded.

Intrigued by the pastor’s dynamic messages, Damman was hooked. Shortly thereafter, he helped develop a special-needs program at the church that was still in its infancy. He also got involved in the church’s small-group community, which enabled him to find a safe place to pray and connect with peers.

“From that point forward, it’s been foot to the pedal, having really integrated myself into more volunteer and service opportunities,” says Damman, who recommitted his life to Jesus through baptism two years ago. He’s now apprenticing as a community-life director and hopes to one day start a career in ministry.

Though the indoor soccer field initially turned off Damman, David Dummitt, lead pastor of 2|42, says that it is one of the ways they invite the community inside their church, the name of which is derived from Acts 2:42-47, which talks about taking next steps with God.

“We built community centers as a gift to our cities,” explains Dummitt. “We designed the facilities around three things that we think people are drawn to—food, art and sports.”

From Outreach Magazine  Small Groups: Beyond the Meetings

They erected not only the soccer field but also an indoor playscape, a restaurant and a CrossFit gym. Though approximately 500 to 700 people enter the building each day, Dummitt acknowledges that the majority of them don’t even know who he is because they don’t attend the church. They come because their children participate in art and music programs. They come for cooking, baking and dance lessons. They come to attend concerts, recitals, graduations and soccer practices.

“When Easter rolls around, however, or a crisis arises in someone’s life, if they feel an impulse to attend church, they show up here because they already feel comfortable in this building,” says Dummitt.

But for those who don’t come to the community center, the church brings the community center to them by way of a van. Groups from the church park in community neighborhoods, crank the sound system, pull out inflatables and yard games, and invite folks to join in the fun. Other times, the van goes into under-resourced areas, where members hand out ice cream and invite kids to summer day camp. The youth ministry also takes the van to high school sports practices and distributes Gatorade to students.

“It’s like a mobile block party,” says Dummitt. “We provide the tools, and then our people use those tools to reach the community.”

Rather than mobilizing a bunch of different ministries at their three campuses, 2|42 leaders train, inspire and release people to go serve.

“We try to be a missionary factory so that everyone in our church feels the ownership to be the church,” says Dummitt. “We ask them to ‘go be the church where you live, work and play.’”

For example, 2|42 recently launched a message series around the theme of Jesus as the greatest servant. At the conclusion of one of the services, Dummitt asked the congregation to go out to lunch and leave their server an enormous tip. After a “love thy neighbor” series, he requested that congregation members donate baby wipes, diapers, food and cribs to several adoption agencies in town.

“It’s nice to be inspired. It’s nice to be educated. But we really want to be transformed,” says Dummitt. “We want to be doers of the Word, not just hearers. That’s why we end every service by asking our congregation, ‘What’s your next step?’”

For Damman, that next step is a big one. This winter he and his new wife, Breanna, whom he met while attending 2|42, will move to Saginaw, Michigan, to help launch a fourth campus.

“I imagine a slow cooker in heaven. God has been slow cooking me for the last few years,” says Damman. “Now it’s time to lift that lid, move to a new city that needs God, and savor his wonderful blessings.”