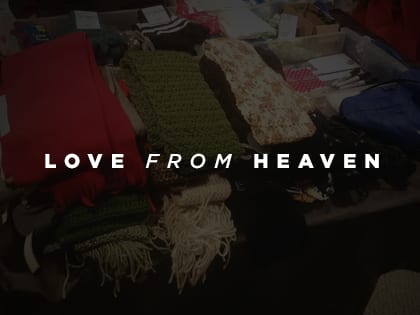 The Church: Grace Fellowship Church in Avon, Indiana
The Challenge: Reach the homeless by meeting essentials and with compassion.
On Big Idea: Create bags of necessities and deliver them to those in need; distribute food and firewood to homeless camps.

Sandy Nelson has endured more agony than any mother should ever bear in one lifetime. In 1993, her son, Sean, died from a self-inflicted gunshot wound, and in April 2016, her daughter, Jenny, perished in the same tragic manner.

A mother of three with a nurturing personality, Jenny suffered from clinical depression. Grappling with poor self-esteem and a toxic romantic relationship, her mental health declined to the point of choosing suicide.

Still deep in grief following Jenny’s death, Nelson was intent on honoring her daughter’s memory while also doing something positive for the local community.

“Jenny had great empathy for the homeless, and she used to say that she would like to hand out bags to them, full of essential items,” recalls Nelson, who lives in Avon, Indiana, a suburb of Indianapolis.

“We, as a church, have a heart for those in need,” says Burns.

Nelson and a team of volunteers drove around Indianapolis, distributing 150 bags, each of which contained a handwritten note that read, “Hoping our gifts of love and light bring you comfort, warmth and a renewed faith in a brighter tomorrow. Love From Heaven, Jenny.”

Not only did the team deliver bags, but they also distributed firewood, hot homemade soup and fresh coffee to local homeless camps.

Though it’s impossible following a suicide not to ask, “Why?” a thousand times over, Nelson says this project—and the perspective that it provided—kept her from drowning in self-pity.

While distributing the bags, Nelson offered a homeless man a new thick coat, but he declined, insisting that someone else was in greater need of the warmth. Another man—a veteran—offered to pray, and in his loud, strong military tone, barked out thanks and praise to God. The incident was, at once, humbling, heart-wrenching and healing, Nelson says.