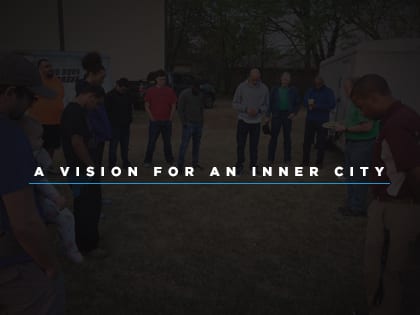 Vision Church in North Carolina takes people in the inner city from enablement to empowerment.

When 8-year-old Donovan (not his real name) first came to Vision Church to participate in the BARE program (Behavior Attitude Responsibility and Entrepreneurship), his heart was full of anger and distrust. On the heels of disturbing news that another black man had been shot by a police officer, Donovan clenched his fists and gritted his teeth, screeching, “I’m gonna kill white cops!”

The BARE leaders, members of Vision Church, allowed the boy to vent, which he did repeatedly for several straight weeks. But they also continued with their mission to provide practical training and solid mentoring to the 30 young men engaged in the program.

Offered quarterly in six-week stretches to males, ages 8 to 16, BARE was launched because 65 percent of the kids in Raleigh’s local Boys Club come from homes with single-parent moms.

“These boys don’t have male voices or figures in their lives, so spending time with men who care about them makes a big impact,” says Jerome Gay, lead pastor of Vision Church. Such was the case for Donovan, who wrestled with abandonment issues because he never knew his father.

By week six of the program, however, Donovan’s attitude had completely changed. Armed with a new perspective, Donovan’s gritted teeth were replaced by wide smiles, and fists waved in fury gave way to open arms for hugging.

Located in the poorest part of Raleigh, Vision Church is a 2010 plant of Summit Church with an average weekend attendance of 200. In 2016, the congregation set a goal of committing 1,500 service hours to the southeast Raleigh community—a number they exceeded by 500.

From Outreach Magazine  How to Stay Connected With the Unchurched

Focusing on four primary areas of service—the poor, the prisoner, the single parent and the unborn—Vision Church aims to be an active, tangible display of the gospel to the community.

In an effort to encourage teenage mothers to keep their babies, the church partners with a nonprofit called Gateway to offer free sonograms. They also partner with the Raleigh Boys Club to sponsor an annual book-bag drive that provides school supplies to over 1,000 students.

Voted “Volunteer of the Year” by the Boys & Girls Club, the church’s future plans include launching a prison ministry, an after-school program and a female mentoring group called Project Promise.

“With inner-city ministry, you’re trying to take people from enablement to empowerment,” says Gay. “Just look at Donovan. He went from anger to gratitude in a matter of weeks because he was impacted by the gospel.”