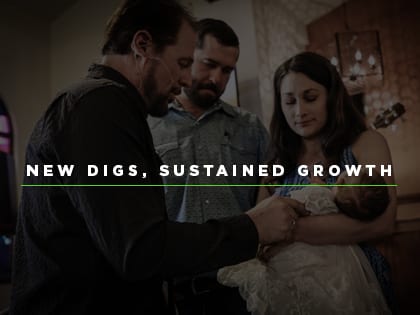 “Who needs Jesus?” bellowed Rod Williams, a former riverboat captain who had a disdain for organized religion.

One day, the Holy Spirit answered that question for Williams as he stared at his own reflection. His soul caught fire for the Lord, and now he ministers to others in unique ways.

Williams owns a gun store and hosts a radio program where he talks about firearms. “But he always finds a way to work Jesus into the conversation,” says David Miller, pastor of Rocky Hill Community Church. “Rod’s life was transformed, and now he’s transforming lives.”

Designed for the unchurched, dechurched and antichurched, Rocky Hill was planted in January 2010 when folks began meeting in a local coffee shop in Exeter, California. Although more than a dozen church plants in the area have failed in the past 15 years, this nondenominational church survived, in part, because Miller embraced networking. “In small towns, it’s all about building relationships,” says Miller, who became friends with the mayor, the police chief and members of the Lions Club. “When the community validates you, others see this is an OK place to go.”

After outgrowing the café, in April 2011 Rocky Hill merged congregations with the First Historic Baptist Church, which was on the verge of closing due to poor attendance. Moving into the old church building, which was constructed in 1916, felt risky. They had been meeting in a hip, downtown coffee shop with a neutral identity—so they feared being perceived as “churchy” in the new digs and scaring people off.

But that didn’t happen. Services are held on Thursday nights and Sunday mornings with an average weekend attendance of 300. There’s talk of adding a vintage service that will incorporate rich, old, celebratory hymns. Other goals include building a youth center, creating programs to strengthen marriages and developing programs for junior high, high school, young adults and seniors.

“Perhaps one day we’ll have 20 to 25 acres of land to make this all come to fruition,” says Miller, who envisions a church of 3,000. “We are committed to growing.”