Home Ideas Doing Whatever It Takes to Reach the Lost 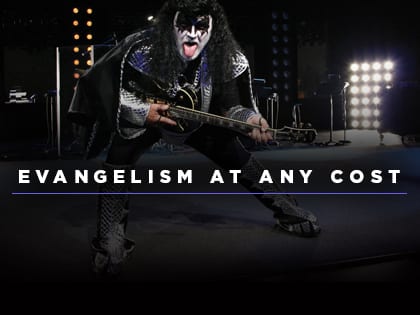 The pastor of Daybreak Church in Hudsonville, Michigan is committed to doing evangelism at any cost.

As a child, Wes Dupin had a front row seat to evangelism in action, during nightly tent revivals where his father invited hundreds to accept Christ. Dupin watched with joy as scores of children, teens and adults from all over the world walked forward to commit their lives to Christ.

Mesmerized by the experience, Dupin thought, That’s the kind of church I want to lead some day—one that’s constantly inviting people to Jesus.

After college, Dupin joined his dad’s evangelism team. His primary job was to teach pastors how to share their faith within their own congregations. In 1989, Dupin and his wife Claudia felt a stirring in their hearts to venture out on their own and start a church in Hudsonville, Michigan, a suburb of Grand Rapids. Unsure of how to get a new church off the ground, Dupin went door to door, inviting people to the elementary school he had rented out for the inaugural service. More than 300 people came that first Sunday to Daybreak Church, most of them unchurched.

“I made a commitment, right then and there, that I was going to spend the rest of my life reaching people who were far from God,” says Dupin. He pursued his goal by focusing on the “unconvinced,” being mindful not to use a bunch of theological terms that would only serve to confuse and alienate those who were new to the faith.

Since that day 27 years ago, Daybreak has grown tremendously. Weekend attendance now averages between 1,200 and 1,400. In an effort to connect with those who are disconnected from church, Dupin, and Claudia, who serves as executive pastor at Daybreak, have adopted creative evangelism methods by infusing art, drama, live music and even crazy costumes into weekend services.

“There’s no magic to my methods,” says Dupin. “I just focus on those who need God.”

A few years ago Dupin constructed a sermon series around the subject of baseball in which he discussed the game as it related to the spiritual lives of believers. On the final Sunday of the series he announced to the congregation, “If there’s anyone here who is serious about having a relationship with God, I invite you to step out of the stands, come onto the field and go public with your faith.” For those who came forward, Dupin offered a baseball with their name and the date written on it, commemorating the moment they accepted Christ into their hearts. Over 100 baseballs were given out that Sunday.

Another of Dupin’s sermon series focused on Johnny Cash’s song “Walk the Line.” To create a visual, Dupin laid a load of gravel on the floor of the auditorium, along with actual railroad ties. The story of Cash’s battle with drug addiction resonated with many people in the congregation, so when Dupin asked if anyone would like to walk the line to become Christ’s follower, a teenage boy stood up. Others followed and soon the sound of crunching gravel filled the auditorium as 150 people chose to follow Christ.

Dupin laments that he often hears folks say that they don’t know how to bring others to Jesus.

“There’s this misnomer that people think they’re not evangelists if they can’t go at it Billy Graham style,” says Dupin. “That’s not true. Turn to a neighbor, relative or colleague and extend that invitation.”

Dupin encourages others to do as Christ asks in Matthew 28, and go out into the world and make disciples of all nations. The key word, says Dupin, is “go.”

“There’s this sense that people will find God on their own or in a small group ministry, and sure, maybe they will,” says Dupin. “But we can’t bank on that fact. Fish don’t just jump into your boat. You’ve got to keep casting.”

Sadly, a great majority of people never even pick up the proverbial fishing pole, and it could be due to nothing more than apathy—which is why Dupin is concerned about the typical level of importance evangelism plays in the church today. To illustrate his point, he offers a hypothetical.

“Let’s say I announce in church that for the next several Sundays I’m going to forego worship. I’d catch some major flack for that and rightfully so,” says Dupin. “The same is true if I declared a moratorium on prayer. “But, if I stopped doing evangelism, I doubt anyone would say a thing. There’s a sense of, ‘We can take it or leave it.’”

For Dupin, “leaving it” simply isn’t an option. There’s too much at stake, which is why Daybreak so greatly values newcomers. The congregation offers gifts and perks to individuals who come not just once but who return a second, third and fourth time.

“One study shows that the person who attends at least four Sundays at the same church will stay and make that their church home. The percentage of those staying is 80 to 84 percent,” says Dubin, who admits that it takes considerable time, effort, money and resources to reach an unchurched person.

“Timewise, staffwise, programwise, moneywise, it’s costly,” says Dupin. “But consider what it cost God to give his Son Jesus. You can’t put a price on salvation.”

Polls reveal that atheism in the U.S. has risen in recent years. Dupin thinks that’s due, in part, to a lack of evangelistic outreach at the local church level. “I’m not blaming or indicting,” says Dupin. “But when a church stops reaching out, the zest and enthusiasm for connecting people with Christ vanishes.”

With so many atheists and agnostics in the world, Dupin says he’s deeply concerned with the number of people who are apathetic about the unsaved population.

“We need to care,” says Dupin. “Because God surely cares.”