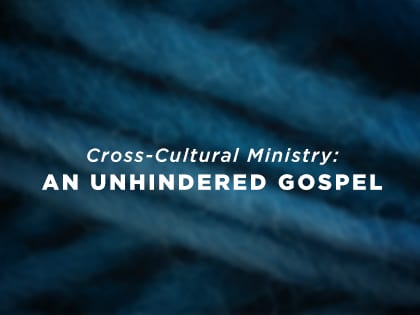 “Luke penned the word unhindered—for he saw the bigger picture, as should we. The gospel is unstoppable.”

He lived there two whole years at his own expense, and welcomed all who came to him, proclaiming the kingdom of God and teaching about the Lord Jesus Christ with all boldness and without hindrance. (Acts 28:30-31)

Have you ever noticed the very final word in the book of Acts? It’s hard to see in the English texts, but in the original Greek, it’s the word unhindered. Most English translations use two words “without hindrance” when translating it (ESV, HCSB, NIV). But Luke, the writer, wanted readers to see it as a pivotal, stand-alone word, summarizing the astounding cross-cultural gospel advance throughout the book of Acts and then looking forward to its continued advance into the future.

But wait, you may be thinking, there are a lot of hindrances to cross-cultural ministry. You have to be out of touch with reality to think that God’s mission goes unhindered. I don’t blame mission workers for thinking that. After all, they face a multitude of hindrances from many different directions: national governments that refuse or complicate visa processes, local authorities that restrict outreach events, religious leaders that see Christian missions as a threat, jealous/ambitious local church leaders that see the missionary as a barrier to their desired place of prominence/control, family members that don’t understand why their loved ones are “wasting their lives” in a faraway country, not to mention lack of adequate funds, lack of adequate help, lack of adequate resources, cool interest in churches back home, sickness in the family, dangers on every side, and occasional out-of-touch directives from the home office. Yes, there seem to be many hindrances to the missionary calling.

From Outreach Magazine  Heather & Ashley Holleman: Living a Life That Invites Others to Jesus

Luke, however, asks us to step back and look at the bigger picture. “The kingdom of God,” which bookends his book, is continuing to advance through the “teaching about the Lord Jesus Christ” (Acts 1:3; 28:31). Though Paul was restricted, he wasn’t silenced. He still found a way to proclaim the gospel. Paul took to writing (that is, the Prison Epistles) and to meeting with people who became believers (that is, the runaway slave Onesimus). He found ways to keep the gospel moving forward “without hindrance.”

Although military surveillance continued, there was no ban by the authorities on Paul’s speaking. Though his hand was still bound, his mouth was open for Christ Jesus. Though he was chained, the Word of God was not … [It] described the freedom which the gospel enjoyed, having neither internal nor external restraint.”

Paul didn’t allow his constrained circumstances to keep him from using other creative means for advancing the gospel. Over the course of his two years of confinement, he didn’t shut up or give up. Though in the least desirable of circumstances, he kept working “with all boldness” (Acts 4:29).

Luke was closing his historical account on the spread of the gospel. He had accomplished his purpose of telling of its propagation from Jerusalem, a provincial center, to the capital of the empire: Rome. The gospel had successfully crossed geographical, linguistic, cultural, and ethnic boundaries. The embryotic Jewish church had grown and morphed into a multicultural movement.

From Outreach Magazine  The 4 R’s of Refueling

“Unhindered” closes the book of Acts on a high note of optimism. As Stott pointed out, it related to God’s providence, which “works out everything in conformity with the purpose of his will” (Eph 1:11 NIV). It reminds us that no opposing grand scheme, no ambitions, no devious plan, and no amount of resistance can prevail. It encourages us to keep on keeping on, even in the face of opposition. “Proclaiming the kingdom of God and teaching about the Lord Jesus Christ” continues onward until every culture is crossed and every ethnic group is reached.

A 2016 OUTREACH RESOURCE OF THE YEAR
Category: Cross-Cultural