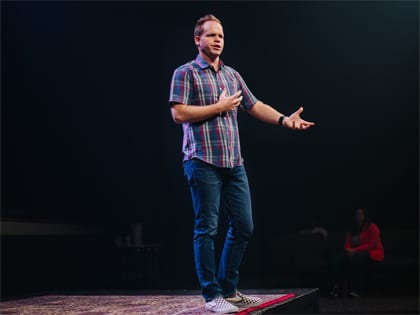 “Positivity is an option for every kind of personality. Each of us can choose to see the hope and potential in every situation.”

In August, Scroggins released his book How to Lead When You’re Not in Charge: Leveraging Influence When You Lack Authority. In the book, he speaks to those readers who are not senior leaders—but who can still cultivate influence.

In Part 1, Scroggins talked about what it’s like working under Andy Stanley, and he explained the difference between influence and authority in leadership. Here, he gives some practical advice on how, exactly, to begin leading without authority.

You say that positive people make good leaders. That seems obvious, but explain why.

A huge indirect mentor for me in leadership has been Daniel Goleman. He’s kind of the father of emotional intelligence. For the longest time, we felt like IQ was most important in the working world. Daniel Goleman came along 10 or 15 years ago and changed that. He looked at great leaders across all industries. Through a bunch of research, he determined what they had in common: EQ (shorthand for emotional intelligence). He talks about how leaders are emotional guides for teams and organizations, primarily through positivity. Their ability to lift the room and lift the spirit of the people on the team is what gives them the ability to lead.

We all want to follow people who are forward-thinking and hope-filled like that. I believe choosing positivity is an option for every kind of personality. Each of us can choose to see the hope and potential in every situation.

I’m naturally an optimistic person, but I choose to be a positive person because I also lean toward cynicism. I’ve found the thing my teams have needed the most is not my education, experience, ideas or talents—they need the energetic attitude I can bring every day if I choose to.

The opposite of positivity is not negativity, but realism. And realists are often great critical thinkers. Why is critical thinking just as valuable as choosing positivity when it comes to cultivating influence?

Choosing positivity and thinking critically go so well together. They really become the pillars for a great synergistic leader. You have to have a spirit that says anything is possible, and have a hope-filled, forward-thinking, positive attitude. But at the same time, we can’t be rainbow-puking unicorns. We can’t stick our head in the ground or stick our fingers in our ears.

We see this in the church world a lot, where people sit in evaluation meetings and they call every Sunday the best Sunday ever. People who have an ear to think critically want to throw up when they hear that, because they think, No, it wasn’t. They could list everything that needs to change.

Critical thinking is the skill of recognizing how to make what’s in front of me better. As important as a positive attitude is, I think learning to add value by thinking critically is just as important. The problem is that, too often, that skill becomes criticism.

How can we think critically without becoming critical?

Any one of us who has ever cheered internally at someone else’s failure—that’s a natural, instinctive response of someone with a critical spirit. But if we’re cheering for other people, then we can take that gift of adding value, of seeing things, of connecting things, questioning things, to make something better. If not, it becomes critical, so we have to fight against that. It begins with being for other people.

From Outreach Magazine  Stephen Witmer: A Vision for Small-Town Ministry—Part 2

Let’s talk about another important behavior needed to lead when you’re not in charge: rejecting passivity. If you’re frustrated at not having a voice in your organization, how do you resist the urge to throw your hands up and become indifferent? How to you stay engaged as an active participant?

The classic example we’ve all experienced is sitting in a meeting and coming to a consensus on a plan and a direction with everyone else. You leave the meeting and start executing on the decision. A few weeks later, you get an email from the boss saying he’s changing direction. That’s so frustrating, because they have no idea how much work you put into it.

That happens in every organization. The problem is that the next time you sit in a meeting and make a decision, you might be way less likely to put any effort toward it because you don’t trust that it’s going to stick. This situation happens in every organization. Every person who has ever tried to cultivate or leverage any kind of influence has experienced it. So what do you do to avoid becoming passive?

The opposite of passivity is really intention. It’s saying, :I’m not going to be a person who’s sitting on my hands in frustration or throwing my hands up in resignation. But I’m going to put my hands to something.” I use the acronym CPR.

‘C’ is that we would choose something, anything, to start working on. When I was an intern, they’d make us clean the prop closet. Later, when I was on staff, I started thinking, What if we had an intern who didn’t wait to be told to go clean the closet? They just saw the closet was messy and went and did it? And then I started thinking, If that’s what I’d want an intern to do, what if I were to do the same thing? I sit in meetings where we talk about the same problems over and over again. What if I just said, “I’m going to pick one, and I’m going choose it and start working on it?”

Then there’s ‘P,’ putting a plan to it. It can be frustrating when the plan gets changed, but we have to know that’s going to happen. What I’ve learned is that a half-baked idea usually wins the meeting when no other ideas have been in the oven. That’s usually the way most meetings work.

From Outreach Magazine  Steven Bouma-Prediger: Earthkeeping Is Integral to Our Christian Faith

Responding to what our boss really cares about is part of our job. Part of my responsibility in my role is to manage the anxiety of my boss. What is he most worried about? What’s his biggest concern right now? Whatever that is, that should be what I’m most worried about. So if I can pay attention to that, it informs what I should choose and how I should plan.

How can someone who is thinking critically, and who sees something that could be improved, respectfully challenge someone in leadership?

It’s always more difficult to have hard conversations on the fly. When I can see one coming and can spend time preparing for it, it’s always going to work out better. I think through the four A’s. No. 1: I would advocate for my boss. How can I communicate that I’m for my boss? I try to declare my intentions by saying, “Hey, I just want to let you know that I’m for you. I believe in you. I enjoy working for you. I want to follow you. I want to make you successful.” That’s advocating.

Third is to acknowledge. What can I say about what I see about the other side of the situation? That’s huge, because you suspend your own judgment and try to feel what the other person is feeling. But then you have to communicate it, acknowledge it. You’d say, “OK, let me get this straight. This is how it seems like you see the situation.”

Last is to advise. That’s when you say, “OK, from my perspective, here are two things I think could be done to change that”. Too often we start in reverse and say, “Hey, let me tell you my thoughts on that problem.” That makes us look arrogant and uninformed, because your boss knows something you don’t know.

And respectfully challenging your leader is actually an example of following well, right? To be good leaders, we also have to be good followers.

If the essence of leadership is influence, I want to have influence on my boss. I want him to know I’m for him. I’ve got to have a good relationship with him. I need to be the person my boss can depend on. I need to add value to the team. I think followership is possibly the most difficult part of leading ourselves. But learning to follow someone else is such a good practice for leadership.

Followership begins in our heart. We have to cheer for our boss, whether we like the person or not—because you can’t lead people you don’t love. And for a lot of people that’s really difficult. We feel like our boss is not allowing us to have the freedom and flexibility we need, or isn’t giving us enough opportunity. But I think there is a rest that can happen in our hearts if we really believe we have a God who says there is no authority that is anywhere he’s not established. So whatever boss I have today is the boss God wants me to have right now.