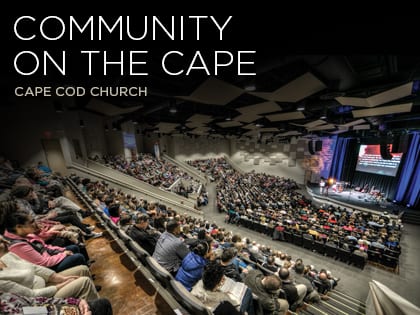 Rewind time to see a distressed Jay Frisbee. The Massachusetts dad was often out with the guys, shouldering about $20,000 of debt and struggling to “keep up with the Joneses.”

Six years later, besides being debt free and more of a family man, Frisbee also feels contentment and peace. “Now my focus is pleasing God. I don’t worry about what other people think,” he says.

A fateful day manning a firetruck at a church’s fall truck-or-treat event ushered in a “significantly better” existence. The fireman felt a “good vibe” there, and saw how well the people treated each other. So he and his wife, Nekea, came to Cape Cod Church—and to Christ. “That church has made a huge impact on my life,” Frisbee says.

Many on the Cape are around age 60 and financially successful with grown children. But what’s next? “They want to do something that matters,” says Feldott, who hopes the clearly printed “live fully” motto starts a dialogue.

If it doesn’t, the church building will. The structure is a chief reason for growth, according to Feldott.

The large and very contemporary facility is hard to deny. Feldott suspects that if it were in Dallas, it would be just another building—and likely look like another church. But when Cape Cod Church opened its 1,000-seat structure against a backdrop of what Feldott calls “postcard-pretty” churches, it instantly became a welcome. He says New Englanders hadn’t seen anything like it.

Attendees outnumbered seats the first Sunday, and they didn’t even advertise. “It was completely unexpected,” Feldott says of the crowd of 1,400. “That Sunday, we turned people away.” After all, they had only around 550 attendees before.

People in Cape Cod are guarded, skeptical and leery of anything new, Feldott says. So the church aimed for visual transparency by building their new facility with a massive glass wall—40 feet tall by 90 feet wide—so people could look inside first, even while driving by. “It’s almost, you can visit before you visit,” Feldott says.

Once inside, free perks—a coffee shop, an indoor playground and heated nursery floors—seem like gifts to a community where trust builds through generosity.

Deep roots into local soil support trust, too. Feldott himself is a Massachusetts native who plugged in to Cape Cod more than 20 years ago. Church leaders have faithfully served and raised family there. “Growth of the past year,” he says, “was made possible by the first 22 years.”

He understands the culture. Less than 3 percent of locals attend evangelical churches in this “intensely secular” place, according to Feldott.

So he speaks as a coach rather than a whistle-blowing referee. “Give people space to disagree,” he says.

That “space” extends from the pulpit with extensive explanations about a passage’s context. They don’t simply forbid behavior because it’s “bad.” They describe the broader picture. Church leaders nix assumptions about guests’ beliefs, and expect to have different views about the gospel.

But they stay anchored in Jesus. “We can argue moral codes and the superiority of one religion over another, but if Jesus actually rose from the dead, then we must seriously wrestle with his claim to be ‘The Way,’” Feldott says.

From Outreach Magazine  How to Streamline Your To-Do List

More than 1,000 families visited last year, and though most—54 percent—were unchurched, 325 people embraced Christ as their savior.

“We take the time—not to blow a whistle out of frustration—but to have a conversation out of love,” Feldott says.