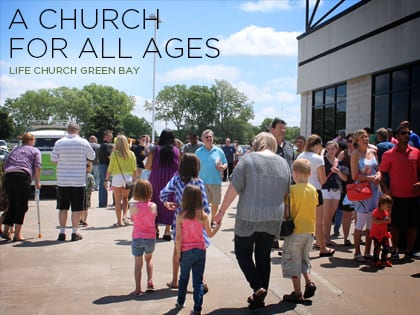 On a recent Sunday, a news station came to Life Church Green Bay in De Pere, Wis., with the intention of producing a story on why the millennial generation no longer attends church. But when the crew arrived at Life Church, they were stunned to find scores of young people milling around the building. The reporter altered the angle of her story and began interviewing the church’s staff and its members to learn why droves of folks—both young and old—are flocking to this church.

Hennessy says that she and the other leaders guide people to Jesus by being very conscious about not speaking in “Christianese.”

“We bring it down to baby believer level so we don’t lose anybody with lingo they don’t understand,” explains Hennessy. Instead of asking someone to pray for the Holy Spirit to guide them, she may suggest that the person simply talk to God as they might talk to a friend. She can then point out that if an idea suddenly pops into their head out of the blue, that’s the Holy Spirit communicating.

The congregation at Life Church Green Bay loves its city. In fact, the church’s mission is to “bring the life-giving message of Jesus within the 920.” That includes every county in the 920 area code, which encompasses Green Bay among other cities. They do this by partnering with the Boys & Girls Club, several community homeless shelters and other nonprofits like “I Heart World”—an organization working to open a human trafficking prevention home in 2016 for girls in need of refuge.

Life Church Green Bay moved into their current facility over a year ago, but they were bursting out of the space in eight months, having grown from 400 to 1,200 members in just a year. The church holds new member classes every Sunday between services. This way new folks can show up on any given week and immediately plug in to the church community; on average, one or two dozen people do this every Sunday.

One reason the church has expanded so quickly is because the staff is intentional and systematic about plugging new folks in to life groups. “Deep discipleship happens through real relationships,” says Hennessy. That’s why the church offers a myriad of life groups so that everyone can find something that appeals to them—from Bible studies to accountability groups, jogging clubs to Mom’s Day Out. These groups happen throughout the year, following a six weeks on/six weeks off schedule so that members don’t burn out.

“We only do things that strengthen the whole family,” says Hennessy. “That’s why we offer childcare during life groups and provide lots of life group options.”

She says they also make sure that no group continues indefinitely with the same members. “If you had a group that had been meeting for 10 years, it would be awkward for a new person to come in,” explains Hennessy. “We purposefully mix it up so there’s never a feeling of the ‘old’ and the ‘new.’”

Since Green Bay is growing rapidly, the congregation consists of many young families and professionals. They are primarily Caucasian with some Hispanics, Hmongs and African-Americans, as well as several Green Bay Packers players filling the pews each week.

From Outreach Magazine  Ed Stetzer: Christians in the Age of Outrage