The powers of the Roman Empire and the Jewish religious establishment colluded in Jesus Christ’s death-bound destiny. Jesus’ execution and death sub Pontio Pilato name the historic moment that he was killed in the Roman Empire. Pilate eventually delivered Jesus up to be crucified as the assembly accused Jesus of “perverting [their] nation, forbidding [them] to pay taxes to the emperor, and saying that he himself is the Messiah” (Luke 23:2). Jesus was sentenced to a death by crucifixion.

On the road to Calvary, Jesus was spit upon, insulted, mocked and beaten. The tortured One marched from Jerusalem to Golgotha, the place of the skull. When Jesus’ strength failed, Simon of Cyrene picked up his cross and carried it, embodying Christ’s call to his disciples to carry their own crosses (14:27-33). When they reached the top of the place of the skull, the Roman soldiers crucified Jesus on a cross between two insurgents (23:26-43).

At the height of his pain and suffering, Jesus showed mercy on the Roman soldiers who crucified him, praying, “Father, forgive them” (23:34). In this prayer of forgiveness we see a subversion of the violent logic of Roman colonial hegemony. For Jesus to offer not merely direct forgiveness, but earnest intercession, was a demonstration that even at the threshold of death, Jesus had the ability to demonstrate loving service. In this act of forgiveness, the cycle of violence, fear, and malediction was radically broken. The powers of hate could not maintain a grasp on him.

The demonic forces at work in the grim social solidarity produced by such public sacrifices were confounded by Jesus’ merciful response; not only was he breaking the cycle of violence begetting violence, he also was courageously proclaiming a new reality of grace and shalom to those who would bloody his Jewish flesh for the sake of the Roman state. Jesus’ forgiving his murderers was an act of improvisation in the Spirit. In a word, this was jazz: on the cross we see a man who loves his enemies, forgives his murderers, gives his cloak to the naked, comforts a thief, cares for his mother, prays for those who despitefully use him, and dies with a stout heart—unveiling a Love Supreme.

The iron logic of the cross stood in opposition to Jesus’ loving improvisation. The cross was a form of torture and execution in the Roman Empire. To maintain the pax Romana, the Romans used crucifixion as a form of large-scale social control. Crucifixions were public spectacles that instilled fear in the hearts of the Jews and others who were subjects under Roman occupation. Through the power of spectacle, Roman leaders could satiate their subjects with violence. The brutal torture of bloody bodies found guilty of sedition transformed the dangerous crowd into sedated spectators. Rome’s political theater formed docile subjects, while the pax Romana continued unbroken.

Roman crucifixions were theaters of oppression that Jesus turned into a theater of and for the oppressed. On the cross that Jesus died on, God made a spectacle of the spectacle of Roman imperial ambition. By God becoming a Jewish peasant prophet and dying on a Roman cross, God “disarmed the principalities and powers and made a public example of them, triumphing over them” (Col. 2:15 RSV). According to Luke’s gospel, the “principalities and powers” of Jesus day were crystallized in human rulers and regimes (Luke 23:13, 35; 24:20; cf. Acts 4:8-10, 26; 13:27-28). These “principalities and powers” are spiritual forces that take social form in the institutions of society (Col. 2:15; Eph. 1:20-22).

The fallen angel Satan is the origin of these “principalities and powers.” The devil (diabolos) is the Greek title for Satan, the Hebrew name of the angel who rebelled against God and fled God’s presence. Satan was the seducer in the Garden of Eden and throughout Jesus’ earthly ministry. From the start of his ministry to the end, Jesus was in conflict with Satan. According to Luke’s Gospel, Jesus spent forty days in the wilderness where he was tempted by Satan (Luke 4:1-13), saw a vision of Satan fall from heaven like a flash of lightning (10:18-20), and proclaimed Satan’s hour of dark power shortly before his arrest (22:53). In all four gospels, Jesus acknowledged Satan as a hostile adversary.

“Prince of This World” was the title that Jesus gave to Satan in the Gospel of John (John 12:31; 14:30; 16:11). Satan’s chief purpose is to thwart the purposes of God — Satan is always seeking to seduce people to forget about the living God and God’s purposes. One of Satan’s most effective strategies was to seduce the leaders of larger institutions, including the Roman imperium of Jesus’ day. Satan’s strategy of institutional takeover proved to be an effective way to aggregate power directed away from worshipful obedience of the living God.

But Satan wanted Jesus. He waited and watched. When Jesus went to the wilderness—alone and in the beginning of his ministry—Satan planned his attack. He would attack Jesus in his most vulnerable places and at the most vulnerable time of his ministry. If Satan could take him out at the start of his ministry, he thought Jesus could never recover. Satan had become a master at testing the faithfulness of the children of God (Gen. 3:1-19; 22:1-19; Exod. 15:25-26; Job).

In the wilderness, Satan used Scripture to try to persuade Jesus to be unfaithful to his heavenly Father. Satan promised Jesus independence (Luke 4:1-4), adopted sonship (4:5-8), and freedom to deny God’s purpose (4:9-12). Satan improvised when seducing the Son of God, thus unveiling the problem with improvisation—sometimes wicked people are the most gifted improvisers; however, Jesus proved to be a more agile interpreter of Scripture and improvisational prophet because he listened and responded to the voice of God.

When Jesus entered Jerusalem at Passover on the back of a colt, Satan saw another ideal opportunity to seduce him to rebel against his Father. During the Passover in Jerusalem, the chief priests and scribes were looking for a way to kill Jesus. When Satan heard this rumbling, he sensed it was time to move and he entered Judas called Iscariot. Then Satan was able to play his role in a plot to kill Jesus that would include Judas’s betrayal (Luke 22:1-6). With Jesus dead, Satan, as the “Prince of This World,” could continue his reign of terror. The plan worked—Jesus was arrested, convicted and crucified.

Satan celebrated during Christ’s crucifixion. But the suffering, mortal human flesh of Jesus concealed his deity. According to Gregory of Nyssa, God concealed himself in the humanity of Jesus Christ in order to be an attractive lure to capture Satan. Gregory describes this divine lure as a fish hook: “through the covering of the flesh the divine power is made accessible, so that the enemy will not take fright at God’s appearing and so thwart his plan for us. … Hence it was that God, in order to make himself easily accessible to him who sought the ransom for us, veiled himself in our nature. In that way, as it is with greedy fish, he might swallow the God head like a fishhook along with the flesh which was the bait.” Thus, the human flesh of Jesus Christ is the bait and the divinity is the fishhook that God uses to catch Satan by surprise. In the case of Satan, God conceals naked deity in order to capture him. Thus we see the concealing of the divine nature in the flesh of Christ for a redemptive purpose.

The devil’s claim of victory on the cross in the death of Jesus is shown to be a lie on the third day after his death. Mary Magdalene, Joanna, Mary the mother of James, and other women return to the tomb, expecting to find the body of Jesus, but instead encounter a stone that has been rolled away and two men who ask, “Why do you look for the living among the dead? He is not here, but has risen” (Luke 24:5). That risen one would appear to his disciples and proclaim, “Thus it is written, that the Messiah is to suffer and to rise from the dead on the third day, and that repentance and forgiveness of sins is to be proclaimed in his name to all nations, beginning from Jerusalem” (24:46-47).

From Outreach Magazine  The Dangerous Act of Loving Your Neighbor

Jesus’ bodily resurrection demonstrates his power over life and death. Not even the power of death can bind the Son of God. The resurrection decisively demonstrates Jesus’ defeat of sin, death and the devil. By God becoming a Jewish peasant and dying on a Roman cross, God “disarmed the principalities and powers and made a public example of them, triumphing over them” (Col. 2:15 RSV). Early Christian theology interpreted the death and resurrection of Jesus as a victory over sin, death, and the devil, a theological vision that Gustaf Aulén refers to as Christus Victor.

Irenaeus was one of the first patristic thinkers to develop this theological vision. For him the resurrection is, according to Aulén, “the manifestation of the decisive victory over the powers of evil, which was won on the cross; it is also the starting-point for the new dispensation, for the gift of the Spirit, for the continuance of the work of God in the souls of men ‘for the unity and communion of God and man.’” Elsewhere Aulén asks, “For what purpose did Christ come down from heaven?” Irenaeus’s answer: “that he might destroy sin, overcome death and give life to man.” In Irenaeus’s description of Christ’s life-giving purpose, we see that Christus Victor is not just a negative triumph over the powers of sin and death, but a positive affirmation of Christ’s vivifying victory, a witness to a conquering Savior whose victory opens up streams of living water, who heals our wounds and binds up our broken hearts, who gives us life as a catalyzing, energizing, improvisational force that invigorates and transforms the world. It empowers our spiritual warfare against the political powers. In Jesus’ victory through his death and resurrection, those living in darkness can now see a light that truly triumphs over the despair, nihilism and existential angst that plagues the human soul.

The day of Jesus’ resurrection is the first day of the “new creation” (Gal. 5:24; 6:14; Rom. 6:6). While a new order has arrived, and the unholy principalities and powers have been eschatologically broken, the struggle for life, freedom, and justice continues until its fulfillment in the heavenly city. Between Jesus’ rising on the third day and the promise of the new Jerusalem, we live into this Resurrection City here and now. Marked by faith, hope, and love in Christ, but also covered in mud, troubled by uncertain leadership, and constantly threatened by the demonic “powers,” the struggle for resurrection continues.

Taken from Resurrection City: A Theology of Improvisation by Peter Goodwin Heltzel. Copyright © 2013. Used by permission of Wm. B. Eerdmans Publishing Co. All rights reserved.

Order from Amazon.com: Resurrection City: A Theology of Improvisation 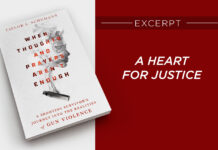