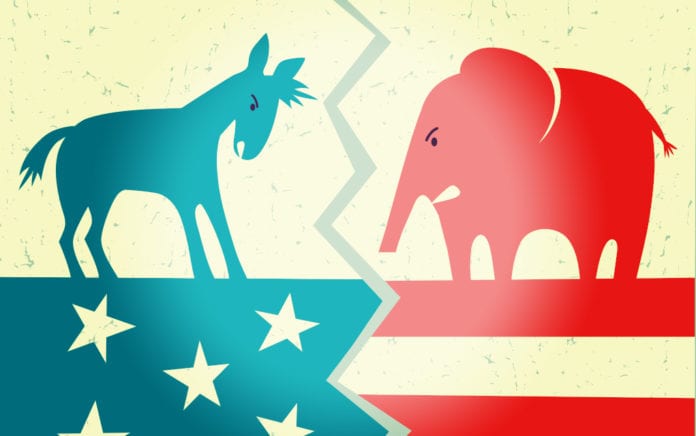 “The longer it takes people to figure out where we stand on political parties, in all likelihood the more faithfully we’re preaching Jesus.”

Sometimes a sermon can be polarizing. Once I was preaching to a crowd of New Yorkers about how Christians should respond to the problem of poverty. I’ll never forget two emails I received the following week, both in reference to the same sermon.

Congratulations! You have convinced me to change my vote. Thank you for helping me see the light.

When I received the two critical emails in response to my sermon about poverty, I shared them with Tim Keller, who at the time was my boss and something of a mentor. Tim recommended I seek to learn what I could from the experience, but not worry too much about the negative feedback, since it actually could be a good sign.

For us preachers, Tim said, the longer it takes people to figure out where we stand on political parties, in all likelihood the more faithfully we’re preaching Jesus.

As is the case with every paradox associated with Christianity, there is a both/and and a neither/nor component as it relates to political loyalties. Unless a human system is fully centered on God (no human system is), Jesus will have things to affirm and things to critique about it. The political left and the political right are no exception.

That helps me. I hope it will help all of us, especially those tired of the rancor and caricature that so often accompanies political discussions.

Government in the Plan of God

The first thing we should say about government is that God is in favor of it. This should encourage anyone with a career in public service.

Presidents, members of Congress, senators, governors, mayors, council members, as well as police officers, military personnel, park and school district employees, and other public servants play an important role in God’s plan to bless the world and bring glory to himself.

From Outreach Magazine  The Wisdom of Outsiders

We know Jesus paid taxes and encouraged his disciples to do the same. To those living in Rome, whose government wasn’t always friendly to Christians, the apostle Paul encourages submission to the governing authorities who are “ministers of God” and to whom taxes, respect, and honor are owed. Peter likewise tells believers that part of their service to the common good is to fear God and honor the Roman emperor (Matt. 17:24–27; Rom. 13:1–7; 1 Pet. 2:17).

The Bible also highlights God-fearing men and women who served in public office. Deborah served as judge over Israel, Joseph served as prime minister for the Egyptian Pharaoh, Daniel served in the court of Nebuchadnezzar’s Babylon, and Nehemiah was a trusted official for the Persian king Artaxerxes.

In the New Testament, Jesus gave high praise to a Roman soldier for his exemplary faith (Matt. 8:5–13). These and other examples confirm that government—whether in theocratic ancient Israel or secular Egypt, Babylon, Persia or Rome—has always been part of God’s plan.

Is the Lord on Our Side? Are We on His?

But when it comes to politics, the Bible gives us no reason to believe Jesus would side completely with one political viewpoint over another. Rather, when it comes to kings and kingdoms, Jesus sides with himself.

The following encounter between Joshua, an Israelite military commander headed into battle, and the angel of the LORD is instructive:

“When Joshua was near Jericho, he looked up and saw a man standing in front of him with a drawn sword in his hand. Joshua approached him and asked, ‘Are you for us or for our enemies?’ ‘Neither,’ he replied. ‘I have now come as commander of the Lord’s army.’ Then Joshua bowed with his face to the ground in worship and asked him, ‘What does my lord want to say to his servant?’ The commander of the Lord’s army said to Joshua, ‘Remove the sandals from your feet, for the place where you are standing is holy.’ And Joshua did that.” —Josh. 5:13–15

From Outreach Magazine  Why I'm Ditching the Word 'Empowerment'

The question we should be asking, then, isn’t whether Jesus is on our side, but whether we’re on his. This is the appropriate question not only for politics and government, but also every other concern.

A Hierarchy of Loyalties

It may surprise us to know there was political diversity among Jesus’s disciples. Included in the twelve are Simon, a zealot, and Matthew, a tax collector. Interestingly, Matthew the tax collector emphasizes this difference more than any of the other Gospel writers (Matt. 10:3–4).

This is significant because zealots worked against the government, while tax collectors worked for the government. You might say Simon was a right-wing “small government” guy who thought the state should keep out of people’s business, and Matthew was a left-wing “big government” guy who made a career out of collecting taxes for the state. Despite their opposing political viewpoints, Matthew and Simon were friends, and Matthew wanted us to know this.

Matthew’s emphasis on a tax collector and a zealot living in community together suggests a hierarchy of loyalties, especially for Christians. Our loyalty to Jesus and his kingdom must always exceed our loyalty to an earthly agenda, whether political or otherwise.

People from varying political persuasions can experience unity under a first allegiance to Jesus the King, who on the cross removed and even “killed” the dividing wall of hostility between people on the far left, people on the far right and people everywhere in between (Eph. 2:16).

Wherever the reign of Jesus is felt, differences are embraced and even celebrated as believers move toward one another in unity and peace.

Taken from Jesus Outside the Lines: A Way Forward for Those Who Are Tired of Taking Sides by Scott Sauls. Copyright © 2015. Used by permission of Tyndale House Publishers, Inc. All rights reserved. This excerpt originally appeared on LifeWayVoices.com.